3 Get Life Imprisonment For Shooting Malaysia Airlines MH17 In 2014

All 298 passengers on board the Boeing 777 flying from Amsterdam to Kuala Lumpur were killed when the plane was hit by a missile. 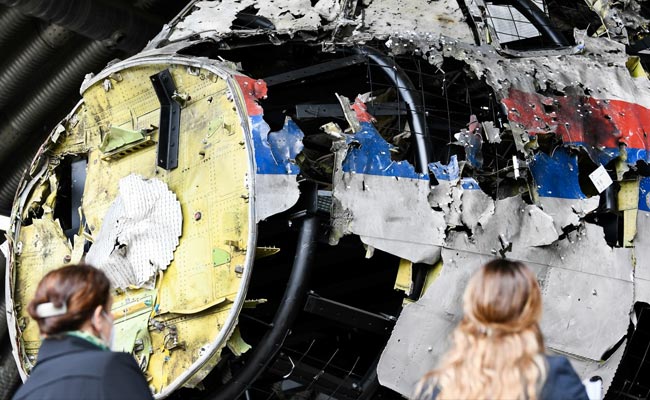 The first three were sentenced to life imprisonment in absentia. (File)

A Dutch court sentenced three men to life imprisonment in the downing of Malaysia Airlines flight MH17 over Ukraine 2014, in the early stages of a war that eight years later would put the world on edge.

Russians Igor Girkin and Sergei Dubinsky and Ukrainian Leonid Kharchenko were found guilty in absentia of murdering all 298 people on board and of bringing down the Boeing 777 with a Russian-supplied missile. A fourth man was acquitted.

Relatives of MH17 victims blinked away tears as the verdicts were read out in a courtroom packed with families who had travelled from around the world for the end of the two-and-a-half-year trial.

"The court calls the proven charges so severe that it holds that only the highest possible prison sentence would be appropriate," head judge Hendrik Steenhuis said.

"Imposing these sentences cannot take away the pain and suffering, but there's hope that today clarity has been provided about who is to blame."

But none of the suspects was at the high-security court on the outskirts of Schiphol Airport, where the doomed plane took off, after Russia refused to extradite them.

The trial represents the end of a long search for justice for the victims of the disaster, who came from 10 countries, including 196 Dutch, 43 Malaysians and 38 Australians.

"Justice has spoken. We wanted justice to be done and that happened, in a very well-balanced verdict," Piet Ploeg, chairman of the MH17 foundation, who lost his brother, sister-in-law and nephew, told AFP.

"The role of Russia has been very clearly confirmed by the court."

Flight MH17 from Amsterdam to Kuala Lumpur was cruising at 33,000 feet (10,000 metres) over war-torn eastern Ukraine when a BUK missile exploded near the cockpit on July 17, 2014, tearing the plane apart.

The crash triggered global outrage and sanctions against Moscow, with Ukraine's famed sunflower fields littered with bodies and wreckage. Some victims, including children, were still strapped into their seats.

Judges found Girkin, Dubinsky and Kharchenko could all be held responsible for the transport of the missile from a military base in Russia and deploying it to the launch site -- even if they did not pull the trigger.

There was not enough evidence to show the involvement of Oleg Pulatov, the only suspect to have legal representation during the trial, they said.

All the suspects were members of the Donetsk People's Republic, an armed group fighting Ukraine's government that judges ruled was directly controlled by Russia.

Girkin, 51, a former Russian spy who became the so-called defence minister of the DPR, was in regular contact with Moscow, particularly over the return of the missile after the tragedy, the court ruled.

Kharchenko, 50, who allegedly led a separatist unit, received direct orders from Dubinsky, 60, who has also been tied to Russian intelligence, to escort the missile to the final launch site, the court ruled.

The defendants had apparently intended to shoot down a Ukrainian military plane rather than a civilian jet but that did not affect their guilt, the judges said.

Russia's continued denials that it controlled the DPR meanwhile meant the defendants could not claim immunity from prosecution as formal combatants, they added.

The court ruled there was "ample evidence" to show the plane was brought down by the missile, and ruled out "alternative scenarios" suggested by the defence, including that it was shot down by a Ukrainian fighter jet.

The BUK missile had been identified as coming from the 53rd Anti-Aircraft Missile Brigade from Kursk in Russia, the court heard.

Moscow has denied all involvement in the crash, and continues to reject claims it controlled the separatist rebels in eastern Ukraine.

But Dutch police investigator Andy Kraag said the case is not closed. "We are looking higher up the chain of command", he said.

Ukraine's Zelensky said on Twitter that "holding the instigators to account is crucial too because a sense of impunity leads to new crimes".

Dutch Prime Minister Mark Rutte called the convictions an "important step" but said they were "not the end".