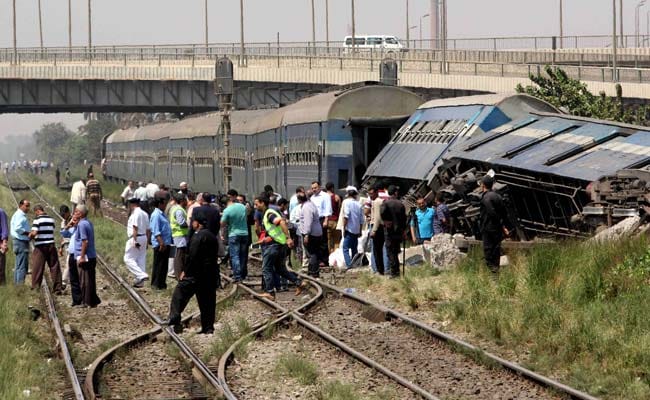 Egyptians check the wreckage of a train after it derailed. (AFP)

Cairo: At least 22 people were killed in a bus collision and five died when a train derailed in separate accidents south of Cairo Wednesday during a busy holiday travel time.

The bus collided with a truck in the southwestern province of Wedi El-Gedid, the Egyptian health ministry said. The number of passengers on the bus was not immediately clear.

Traffic accidents are common in Egypt, where many of the country's roads are not well-maintained and regulations are laxly enforced.

The train, carrying about 60 passengers, derailed after leaving Cairo for the southern city of Aswan, police and medical officials said.

The conductor hit the brakes when he spotted a problem with the tracks, causing three carriages to overturn near the village of Al-Ayyat, officials said.

Egypt's roads and trains are busier before national holidays, such as the Eid festival next week, with people working in Cairo and other major cities visiting their home towns and villages.

Promoted
Listen to the latest songs, only on JioSaavn.com
Al-Ayyat was the scene of Egypt's deadliest rail accident in 2002 when a cooking gas cylinder exploded on a train and led to a fire that killed 361 passengers.

Trains are often overcrowded in Egypt, adding to the safety risks.