There was no claim of responsibility for the attack in Pakistan's gas-rich Baluchistan, which may raise concern about security for the Pakistani section of China's Belt and Road initiative 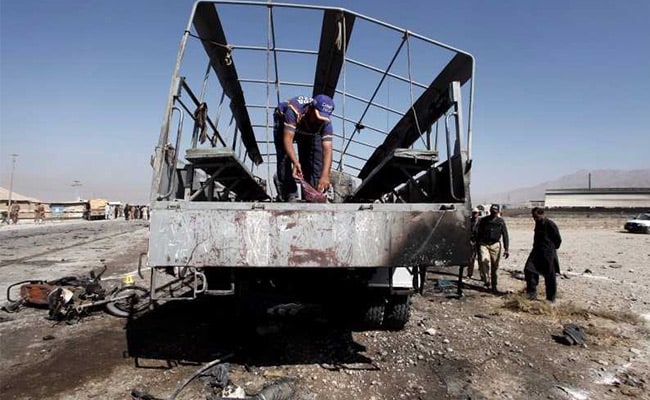 On Wednesday too, a suicide bomber rammed a car into a police truck in Pakistan's Quetta (Reuters)

QUETTA, Pakistan: Unidentified men threw a grenade into a labourers' hostel in the Pakistani port of Gwadar wounding 26 of them, police said today, in an attack likely to raise concern about security for the Pakistani section of China's Belt and Road initiative.

There was no claim of responsibility for the attack, one of three on Thursday in the gas-rich southwestern province of Baluchistan, a key section of the plan for energy and transport links connecting western China with the Middle East and Europe.

"The labourers were having dinner at the hostel when motorcyclists attacked them with a grenade," police official Imam Bakhsh told Reuters.

Separatist rebels in Baluchistan, fighting against what they see as the unfair exploitation of the province's resources, have for years attacked energy and infrastructure projects, including the Gwadar deep-sea port on the Arabian Sea.

Separatist fighters and terrorists also operate in Baluchistan, which shares borders with both Afghanistan and Iran.

Security officials have said that terrorists trying to disrupt construction of the Chinese economic corridor through Pakistan have killed more than 50 Pakistani workers since 2014.

Pakistan has assured China that it can provide security for the $57 billion worth of projects that it plans.

In the other attacks, a grenade attack at a food court in the town of Mastung, 55 km (35 miles) from the provincial capital of Quetta, wounded 15 people, a police official said.

In the third attack, gunmen on a motorcycle opened fire at paramilitary soldiers killing one and wounding four in the west of the province.

On Wednesday, a suicide car-bomber rammed a police bus in Quetta killing five policemen and two passers-by. The Pakistani Taliban claimed that attack.

Promoted
Listen to the latest songs, only on JioSaavn.com
A suicide bombing claimed by ISIS at a Sufi Muslim shrine in Baluchistan this month killed 22 people and wounded more than 30.