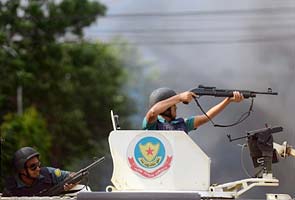 Dhaka: At least 22 people were killed as Bangladeshi police fought pitch battles with tens of thousands of hardline Islamists in the capital Dhaka, police and medical officials said on Monday.

"We were forced to act after they unlawfully continued their gathering at Motijheel. They attacked us with bricks, stones, rods and bamboo sticks," he told AFP, adding that the protesters had dispersed early Monday morning.

Police inspector Mozammel Haq at Dhaka Medical College Hospital told AFP 11 bodies were taken to the clinic including several who were hit by bullets and a policeman who had been hacked in the head by protesters with machetes.

Eleven other bodies were taken to three clinics including four at Al Baraka and seven at two branches of Islami Bank hospitals which are based close to the trouble spots.

The violence erupted Sunday afternoon and continued through until the early hours of Monday morning.

It came after hundreds of thousands of Islamists demanding a new blasphemy law on Sunday blocked highways and fought running battles with police, leaving 10 people dead and hundreds injured in the Bangladeshi capital.

Chanting "Allahu Akbar!" ("God is greatest!") and "One point, One demand: Atheists must be hanged", activists from the hardline Hefajat-e-Islam marched along at least six highways, blocking transport between Dhaka and other cities.

Promoted
Listen to the latest songs, only on JioSaavn.com
Police said about 200,000 people had marched to central Dhaka, where fierce clashes erupted between thousands of rock-throwing protesters and security officials, with police beating back demonstrators with batons.