Over the past weeks, tens of thousands have taken part in protests demanding a fair vote after allies of Kremlin critic Alexei Navalny were barred from the Moscow parliament vote taking place this Sunday. 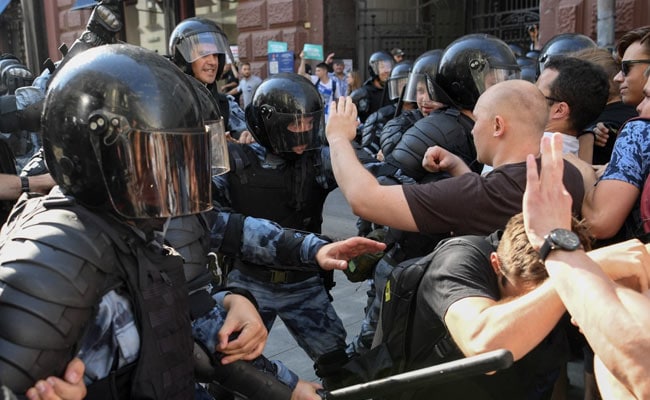 Two Russians were sentenced Tuesday to two and three years in jail respectively in the first major convictions over anti-government demonstrations this summer.

The convictions came as investigators dropped "mass unrest" charges against five others, and days ahead of the controversial local elections that sparked the protests.

Danila Beglets, a father of two and the sole breadwinner of his family, was sentenced to two years in prison for attacking a policeman.

At first Beglets insisted he did not take part in the July 27 rally and turned up near the site of the protest by accident. He later admitted using violence against police in an apparent bid for a reduced sentence.

The second, Ivan Podkopayev, was convicted of attacking policemen with pepper spray during the same July rally and sentenced to three years in prison.

Over the past weeks, tens of thousands have taken part in protests demanding a fair vote after allies of Kremlin critic Alexei Navalny were barred from the Moscow parliament vote taking place this Sunday.

Several thousand people were briefly detained during the demonstrations, and more than a dozen had been facing prison time on charges of mass unrest and attacking policemen.

Protesters insist their rallies are peaceful, while rights groups and Western countries have accused Russian police of using excessive force against demonstrators.

Investigators did back down in other cases on Tuesday however, announcing that the mass unrest charges had been dropped against five men detained over the July 27 protest.

The committee said it had requested that two more people, including student Yegor Zhukov, be transferred from jail to house arrest.

Three protest leaders were briefly detained late on Monday, including prominent journalist Ilya Azar and two Navalny allies, in connection with the latest rally held at the weekend.

More activists were detained on Tuesday.

Azar, a municipal deputy who works for top opposition newspaper Novaya Gazeta, could face up to 30 days in jail, while Navalny ally Lybov Sobol got a hefty new fine.

Azar's detention sparked a backlash after police took the journalist away and left his 20-month-old daughter unsupervised at home in an unlocked apartment.

Azar said he expected to be detained but could not imagine police would leave his child home alone.

"Unfortunately, you have to be ready for everything if you live here and remember the Soviet-era practices," he told AFP.

Azar's wife Ekaterina Kuznetsova said she was lost for words.

"I came home and found our apartment unlocked while the child was sleeping peacefully in her bed. Alone," she said on Facebook.

The Kremlin's own human rights' council called on prosecutors to investigate police officers over the incident.

Sobol, a 31-year-old lawyer for Navalny's Anti-Corruption Fund, said the latest detentions were "revenge" for their activism and efforts to get on the ballot.

"People are ready to continue protesting," Sobol, who refused food for more than a month to protest her exclusion from the election, told AFP.

In a separate case on Tuesday, a court sentenced a blogger to five years in prison for a tweet that called for attacks on the children of law enforcement officials.

The tweet was written in response to the police crackdown.

The protests and ensuing crackdown are the biggest since a wave of demonstrations in 2011-12 against Vladimir Putin's return to the Kremlin.

At the peak of the protests in August some 50,000 to 60,000 people attended, while the latest demonstration at the weekend drew a few thousand.