The male student, who is a suspect in the shooting, has been detained, Noblesville Police Chief Kevin Jowitt told a news conference. 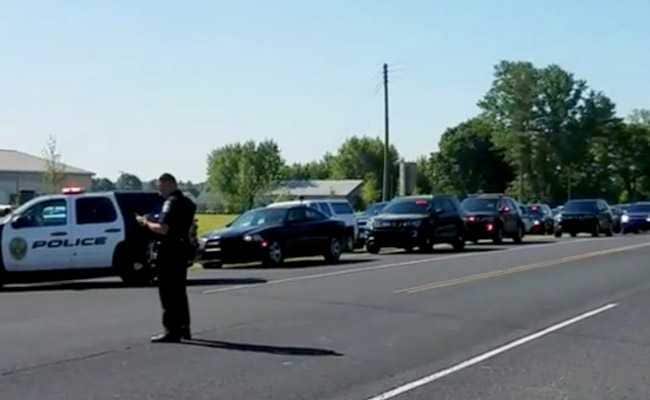 The incident in Indiana was the latest in a series of shootings at U.S. schools and colleges

A teacher and a teenage student were injured in a shooting at an Indiana middle school on Friday morning and another student was in custody, police said.

The male student, who is a suspect in the shooting, has been detained, Noblesville Police Chief Kevin Jowitt told a news conference.

The incident was the latest in a series of shootings at U.S. schools and colleges, some of which have claimed dozens of lives, stretching back decades.

The only people injured in Friday's incident at Noblesville West Middle School were the teenage student and the teacher, according to Jowitt. Local TV station WTTV, citing a source at the scene, said the student victim suffered a fractured ankle.

The police chief said the school, attended by more than 1,350 students, has been cleared, but he did not provide details of the incident.

"The situation is contained," he said.

The shooting occurred shortly after 9 a.m. EDT (1300 GMT) at the school about 25 miles (40 km) northeast of Indianapolis, and authorities said the school was placed on lockdown.

A student interviewed by WTTV said the shooter entered a science class and the teacher swatted a gun away from the shooter.

Danielle Sirilla, a spokeswoman for Indiana University Methodist Hospital said an adult was taken to the hospital while a teenager was taken to Riley Hospital for Children at IU Health nearby. She said no information was available on their conditions.

Indiana Governor Eric Holcomb, flying back from Europe, said in a statement that he was monitoring the situation.

"Our thoughts are with all those affected by this horrible situation," he said, adding that about 100 State Police officers had been made available to work with local responders.

The incident occurred a week after a 17-year-old high school student in Santa Fe, Texas, near Houston shot and killed eight classmates and two teachers.

Promoted
Listen to the latest songs, only on JioSaavn.com
In contrast to Florida, where the killing of 17 teens and educators in February sparked a youth-led movement calling for new restrictions on gun ownership, the Texas tragedy saw elected officials and survivors alike voicing support for gun rights.
© Thomson Reuters 2018