Police said the passengers died when flames broke out overnight on a northbound bus outside the city of Karachi, where they settled after fleeing one of the worst flood-hit areas. Volunteers search the remains of a burnt passenger bus.

At least 18 Pakistanis, including 12 children, were killed in a bus fire as they journeyed home after fleeing catastrophic monsoon flooding, officials and rescue workers said Thursday.

Pakistan has been hit by unprecedented monsoon rains this year, putting a third of the nation underwater, displacing eight million people, and causing $28 billion worth of devastation.

As the waters slowly recede, thousands of the displaced -- many living in ramshackle tent cities -- are travelling back to their sodden homes to remake their lives.

Police said the passengers died when flames broke out overnight on a northbound bus outside the city of Karachi, where they settled after fleeing one of the worst flood-hit areas. 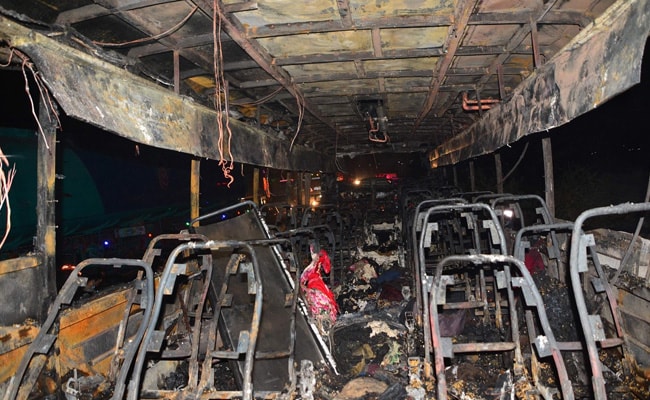 The burnt interior of a passenger bus is seen after an overnight fire incident.

"They were going back to their village when they were overtaken by this accident," Vinod Kumar, a district health official present at the scene, told AFP.

"Apparently, the fire broke out in the air-conditioning system of the bus but investigations will reveal the real cause," said police officer Hashim Brohi, who was also present.

The historic floods across the nation -- which have killed 1,700 -- have been linked to climate change.