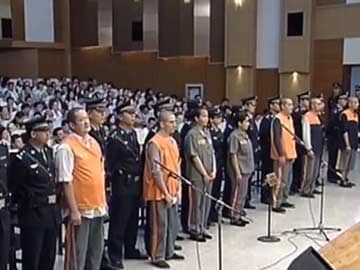 This screen grab taken from state broadcaster China Central Television (CCTV) footage on June 16, 2014 shows eight prisoners (in orange and brown) standing at attention upon their arrival at the Intermediate People's Court in the Xinjiang capital Urumqi f

Beijing: China today executed 13 people, stated to be Islamist "terrorists" from the restive Xinjiang province, while two other suspected militants were killed while attempting to carry out knife attacks.

The 13 who were executed today were involved in seven cases, according to local courts in prefectures of Aksu, Turpan and Hotan, state-run Xinhua news agency reported.

This was stated to be highest number of executions in Xinjiang, which is restive over numerous militant attacks following unrest among the native Uyghur Muslims over the increasing settlements of Hans from rest of China.

China, which stepped up nationwide security blames the East Turkestan Islamic Movement (ETIM), an al-Qaeda-backed group fighting for the independence of Xinjiang, for the attacks in and outside the northwestern province.

In one case, three people were convicted of organising and leading terrorists to attack a police station, hotel, government office building and other venues in which 24 police officers and civilians were killed and 23 others injured in Shanshan County of Turpan Prefecture on June 26 last year.

In a new attack yesterday, three knife-wielding men rushed into a chess and card room in Hetian Prefecture of Xinjiang and attempted to attack people inside, Xinhua reported.

The civilians fought back and raised an alarm.

Armed patrol forces arrived at the scene quickly and subdued the attackers with the help of locals.

Two attackers were killed and another injured person was arrested. Four civilians were injured in fighting with the attackers, it said.

Also today, a court in Xinjiang sentenced three people to death for the terrorist attack at the Forbidden City near Beijing's Tiananmen Square in October 2013.

Five people including an Uyghur man, his wife and mother were killed in the suicide attack and several others injured.

Promoted
Listen to the latest songs, only on JioSaavn.com
Eight others regarded as accomplices were arrested.