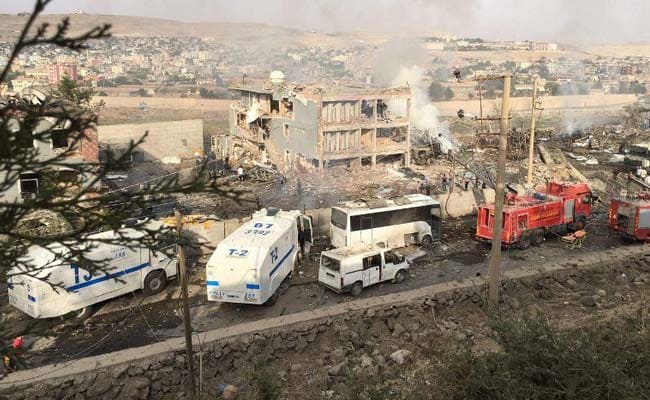 The blast almost completely destroyed the police headquarters in the southeastern town of Cizre.

The early morning blast almost completely destroyed the police headquarters in the southeastern town of Cizre, just north of the Syrian border.

"At 6:45 am (0345 GMT), a suicide attack with a vehicle laden with explosives was carried out by the PKK terror group on the building of anti-riot police," the provincial governor's office said in a statement.

Eleven police officers were killed and 78 people injured, three of them civilians, the statement added.

The explosion went off hours after the Turkish military shelled positions held by Kurdish militia inside Syria.

Turkey says its three-day-old operation in Syria - its biggest to date in its war-torn neighbour - is aimed both at ISIS and the Kurdish People's Protection Units (YPG) that is leading the fight against the terror group in the area.

Ankara has labelled the YPG, which has links to Turkey's outlawed PKK, as a terror group bent on carving out an autonomous Kurdish region in Syria on the Turkish border.

The blast in Cizre tore the facade off the four-storey police headquarters, sending up clouds of thick black smoke. Adjacent buildings were also badly damaged.

The state-run Anadolu news agency said the bomb went off 50 metres away from the building at a control post.

Cizre, a majority Kurdish town, has borne the brunt of renewed violence between the outlawed PKK and government forces since the collapse of a ceasefire last year.

Turkish security forces have been hit by near daily attacks by the PKK since the two-and-a-half year truce collapsed, leaving hundreds of police officers and soldiers dead.

The latest bombing came at a critical moment, with hundreds of Turkish forces and dozens of tanks deployed inside Syria.

Turkey today sent four more tanks over the border, said an AFP photographer at Karkamis on the Turkish side of the frontier.

Kurdish activists have accused Turkey of being more intent on preventing Kurds creating a stronghold along its border than fighting ISIS terrorists.

But Prime Minister Binali Yidirim today denounced as a "bare-faced lie" suggestions in Western media that the Syria operation was singling out Kurds.

"They either know nothing about the world, or else their job is to report a bare-faced lie," Yildirim said.

Ankara's hostility to the YPG puts it at odds with its NATO ally, the United States, which supports the YPG in the fight against ISIS.

On Wednesday, pro-Turkish Syrian rebels, backed by Turkish tanks and fighter jets, seized the border town of Jarabulus on which the YPG appeared to have designs.

Blasts could be heard coming from the town today as pro-Ankara fighters blew up unexploded ordnance. The town had been held by ISIS since 2013.

Yesterday, Turkey shelled Kurdish fighters in the area, saying they were failing to observe a deal with the US to stop advancing west into IS-held territory.

Anadolu quoted security sources as saying that the military would continue to intervene against the Syrian Kurdish fighters until they began to retreat.

US Vice President Joe Biden, visiting Turkey on Wednesday, made clear that Washington has warned the YPG not to move west of the Euphrates river after recent advances, or risk losing American support.

Murat Karayilan, one of the top Iraq-based leaders of the PKK, said this week the group was infuriated by the operation in Syria.

He claimed the campaign resulted from an "agreement" between Turkey and IS.

"ISIS has never abandoned a town in one day without putting up a fight," he told the pro-PKK Firat news agency, using another acronym for IS.

"This dangerous agreement will extend the lifespan of ISIS."

The PKK has kept up its assaults in Turkey in the weeks since the unsuccessful July 15 coup by rogue elements in the military aimed at unseating President Recep Tayyip Erdogan.

The government for its part has vowed to press on with the campaign to eradicate the PKK from eastern Turkey.

The military has conducted several operations and imposed punishing curfews in towns and cities in southeast Turkey over the past year that have claimed civilian lives, including in Cizre, a bastion of PKK support.

Promoted
Listen to the latest songs, only on JioSaavn.com
Over 40,000 people have been killed since the PKK first took up arms in 1984 with the aim of carving out an independent state for Turkey's Kurdish minority.

It is proscribed as a terrorist group by Turkey, the European Union and the United States.