Josef Schuetz is accused of involvement in the murders of 3,518 prisoners at the Sachsenhausen camp in Oranienburg, north of Berlin, between 1942 and 1945. 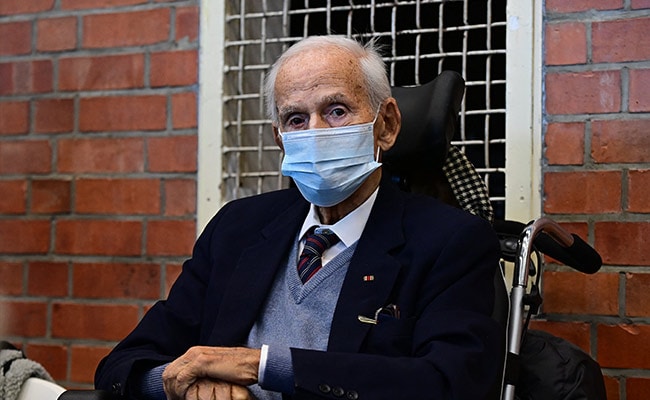 A German court on Tuesday handed a five-year jail sentence to a 101-year-old former Nazi concentration camp guard, the oldest person so far to go on trial for complicity in war crimes during the Holocaust.

Josef Schuetz was found guilty of being an accessory to murder while working as a prison guard at the Sachsenhausen camp in Oranienburg, north of Berlin, between 1942 and 1945, presiding judge Udo Lechtermann said.

The pensioner, who now lives in Brandenburg state, had pleaded innocent, saying he did "absolutely nothing" and was not aware of the gruesome crimes being carried out at the camp.

"I don't know why I am here," he said at the close of his trial on Monday.

But prosecutors said he "knowingly and willingly" participated in the murders of 3,518 prisoners at the camp and called for him to be punished with five years behind bars.

More than 200,000 people, including Jews, Roma, regime opponents and gay people, were detained at the Sachsenhausen camp between 1936 and 1945.

Tens of thousands of inmates died from forced labour, murder, medical experiments, hunger or disease before the camp was liberated by Soviet troops, according to the Sachsenhausen Memorial and Museum.

Prosecutors said Schuetz had aided and abetted the "execution by firing squad of Soviet prisoners of war in 1942" and the murder of prisoners "using the poisonous gas Zyklon B".

During the trial, Schuetz made several inconsistent statements about his past, complaining that his head was getting "mixed up".

At one point, the centenarian said he had worked as an agricultural labourer in Germany for most of World War II, a claim contradicted by several historical documents bearing his name, date and place of birth.

After the war, Schuetz was transferred to a prison camp in Russia before returning to Germany, where he worked as a farmer and a locksmith.

Schuetz remained at liberty during the trial, which began in 2021 but has been delayed several times because of his health.

Despite his conviction, he is highly unlikely to be put behind bars, given his age.

His lawyer Stefan Waterkamp told AFP ahead of the verdict that if found guilty, he would appeal.

The 2011 conviction of former guard John Demjanjuk, on the basis that he served as part of Hitler's killing machine, set a legal precedent and paved the way for several of these twilight justice cases.

Since then, courts have handed down several guilty verdicts on those grounds rather than for murders or atrocities directly linked to the individual accused.

Among those brought to late justice were Oskar Groening, an accountant at Auschwitz, and Reinhold Hanning, a former SS guard at Auschwitz.

Both were convicted at the age of 94 of complicity in mass murder but died before they could be imprisoned.

A former SS guard, Bruno Dey, was found guilty at the age of 93 in 2020 and was given a two-year suspended sentence.

Separately, in the northern German town of Itzehoe, a 96-year-old former secretary in a Nazi death camp is on trial for complicity in murder.

She dramatically fled before the start of her trial but was caught several hours later.

While some have questioned the wisdom of chasing convictions related to Nazi crimes so long after the events, Guillaume Mouralis, a research professor at France's National Centre for Scientific Research (CNRS), said such trials send an important signal.

"It is a question of reaffirming the political and moral responsibility of individuals in an authoritarian context (and in a criminal regime) at a time when the neo-fascist far right is strengthening everywhere in Europe," he told AFP.