In an official statement on Monday, the TSRTC Managing Director said the announcement by the protesting workers to call off their 52-day strike was "ridiculous". 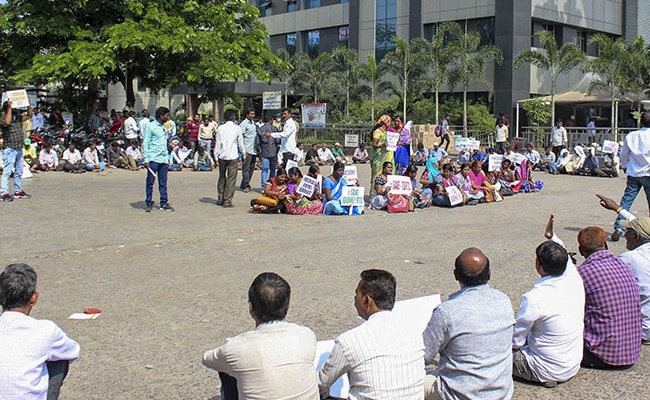 On Monday, the Telangana transport workers called off their 52-day strike.

About 50,000 workers of the Telangana State Road Transport Corporation (TSRTC), who called off their strike after nearly two months on Monday, "cannot be taken back on duties", top transport official Sunil Sharma has said. Mr Sharma has also requested these workers to "not create law and order situation" by going to depots today.

In an official statement on Monday, the TSRTC Managing Director said the announcement by the protesting workers to call off their 52-day strike was "ridiculous".

"The announcement of RTC JAC that they will be joining duties from tomorrow is ridiculous. On one hand they say they will continue the strike and on the other, say they will join duties. Nowhere in any Public Sector Undertaking in the country, workers and employees abstaining from duties and joining their duties at their whims and fancies will never happen nor it can be accepted," Mr Sharma said. The RTC management would take a "suitable decision based on the Labour Commissioner's decision," according to the statement.

On Monday, the transport workers called off their strike as the union leaders demanded that they "must not be harassed or punished" for protesting. Tens of thousands of Telangana bus drivers, conductors and road transport corporation workers began a strike on October 5. They had a list of 26 demands, including the merger of the TSRTC with the government so they could become government employees. As a result of the strike many state-run buses stayed off the roads, affecting thousands during the festival season, which caused "immense inconvenience to the people", according to the TSRTC.

The Telangana High Court on Sunday refused to adjudicate on the issue, referring it to Labour Department instead. The court also said it had no power to stop privatisation of bus services in the state.

Responding to the protesting workers, the TSRTC said on Monday: "Till the process as suggested by the High Court is completed, workers who are on illegal strike cannot be taken back on duties. It will not be possible under Acts and rules for the workers who went on strike on their own and to join duties again".

"The state government or the RTC Management will not tolerate anyone who breaks the law and order situation and stringent action will be taken against the guilty," the statement further read.

Earlier this month, the Chief Minister had declared the striking employees would not be allowed to return to work after the expiry of a November 5 deadline. Employees would solely be responsible for such a situation and should therefore decide whether to save their jobs or trouble their families, a press release had said.

At least three RTC employees have committed suicide and seven others have died of a heart attack since the strike began.