Telangana Transport Strike: As the strike entered the 15th day today, the protesting TRSTC employees want the government to meet their 26 demands, including a merger with the government

The 12-hour bandh began at 5 am amid heightened security at most bus depots.

In the biggest protest since the employees of the Telangana State Road Transport Corporation (TSRTC) called for a strike against the KCR government on October 5, a statewide shutdown was observed by the TSRTC staff today, disrupting transportation across Hyderabad and 32 other districts. More than 50,000 cabs across the state are also off the road as Ola and Uber cab drivers joined the transport strike, demanding regularisation of the ride-hailing market.

The 12-hour bandh began at 5 am amid heightened security at most bus depots. At the Mahatma Gandhi Bus Station, the biggest bus station in Hyderabad, there were no buses running to any destination in Telangana and neighbouring states.

"We told the private drivers and conductors that we are on strike today and they will be driving our buses at their own risk. All of them cooperated with us,'' union leader VSCS Reddy told NDTV.

In the last two weeks of the protest, ever since Chief Minister K Chandrashekar Rao said nearly 48,000 striking workers had "self-dismissed themselves", private drivers and conductors were hired to run nearly half of the buses in the state. Today, most of these buses were also not operating.

Upender, a local, said he had no option but to wait for over 10 hours at a bus station with his wife and two children. He arrived from Bengaluru this morning and wanted to go to Khammam but there was no transport. "No buses, no taxis... How should one go? I just managed to book a train later in the day to Khammam. So we will have to wait till then.'' 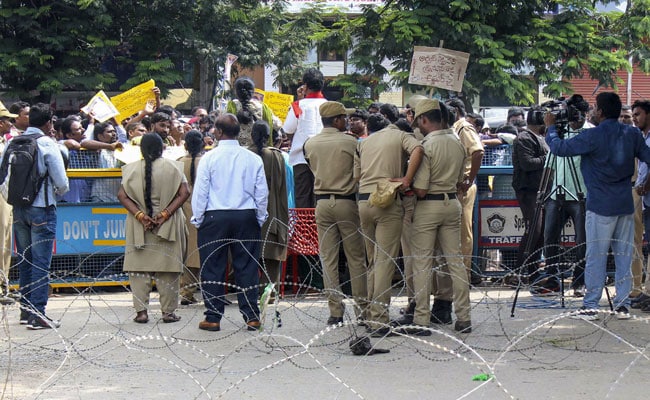 While the transport strike has forced closure of schools and colleges till Monday, people were seen using private vehicles to reach airport and railway station today.

"KCR is being autocratic, like a monarch. He does not want to listen to anyone, not even to the courts who said the government must hold talks. We are sending a report to the central BJP leadership on this,'' said K.Laxman, state BJP chief, who was among the many leaders taken into custody amid protests.

As the strike enters the 15th day today, the protesting TRSTC employees said they want the government to meet their 26 demands, including a merger of the transport corporation with the government. Two protesting employees of the TSRTC have committed suicide since last week after they did not receive their salary for September. Striking transport employees claim that four more employees have tried to end their life since the government dismissed them.

On Friday, the Telangana High Court directed the protesting employees of the TSRTC  and the state government to settle all disputes before October 28 and report to it about the settlement.

The government's lawyer told the court that negotiation is not possible, to which the court responded that since 50 per cent of the 45 demands do not have a financial component, the government cannot refuse to listen to them and negotiate.

The court had earlier pulled up the government and union leaders over the strike, directing them to end the stir. The state government was also directed to pay salaries for September to all the 49,190 employees by October 21.

The KCR government, however, said that only 1,200 employees of the 49,190 employees are on its rolls.