The video showed the home guard risking his life moving through the fast-flowing stream in Nagarkurnool district. 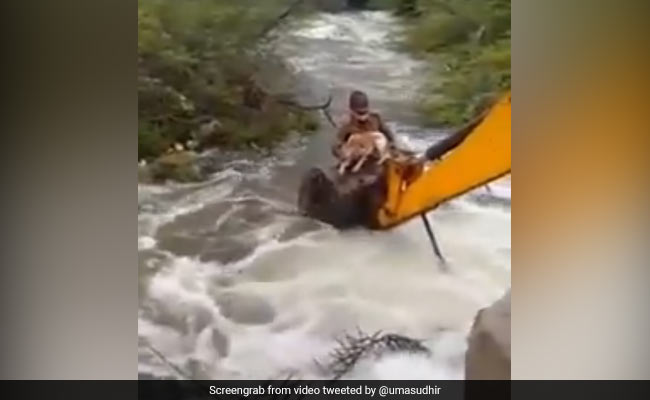 A heartening video of a home guard with the Telangana police rescuing a dog trapped in bushes along a flooded stream has gone viral. The dramatic, around 2-minute long footage shows Mujeeb-ur-Rehman stepping into the overflowing stream to save the dog.

The video showed the home guard risking his life moving through the fast-flowing stream in Nagarkurnool district. The man can be seen holding a JCB excavator for support as he tries to grab on to the dog to bring it to safety amid cheers from the onlookers.

A dog is a man's best friend. Sometimes a man can be a dog's best friend. This heartening video of @TelanganaCOPs constable Mujeeb rescuing a #dog from bushes where he was trapped, risking his own life #Nagarkurnool#Telangana#Salute to compassion @TelanganaDGP@ndtv@ndtvindiapic.twitter.com/QVd9anur3B

Mr Rehman said that as soon as he spotted the canine, he spontaneously stepped in the water to rescue it.

After the visibly frightened dog climbed on to him, the home guard first placed it on the JCB, used as a makeshift bridge, before stepping out of the flooded waters.

The stray was later let off in a nearby village where he is often seen.

The home guard's courageous and humane gesture was praised by the local police, the district superintendent as well as the state police chief, Mahender Reddy.

Mr. Mujeeb #HomeGaurdOfficer#NagarkurnoolPoliceStation risked his life to save a dog from a stream - #TelanganaRains2020.
A caring concern for every living creature of the ecosystem.
VC: @NewsMeter_Inpic.twitter.com/tJmU9aA5lK

Mr Mujeeb's wife and children said they were proud of him for his courage and compassion.