Telangana assembly election: BJP president Amit Shah said the Congress's support base is shrinking drastically, and it is incapable of becoming an alternative to the TRS 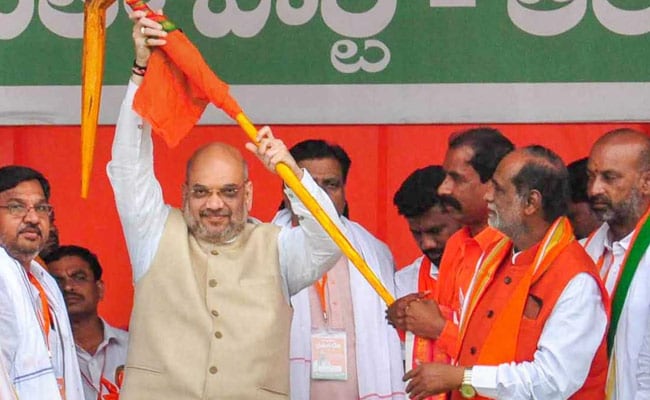 Amit Shah campaigns in Telangana's Karimnagar ahead of the assembly election

Pitching for a change of government in Telangana, BJP president Amit Shah on Wednesday  said neither the ruling TRS nor the main opposition Congress can give a push to development in the southern state.

He said if voted to power after the Lok Sabha elections next year, the government under Prime Minister Narendra Modi will ensure "not a single infiltrator" was left in the country.

"Telangana's development is not possible either under KCR (K Chandrasekhar Rao) family or Rahul baba. They are into break-in-India while Modi ji pursues the policy of make-in-India," Mr Shah said at a rally in Karimnagar, 165 km from Hyderabad.

The BJP is looking to win in Telangana alone for the first time after the Telegu Desam Party broke away from the NDA recently.

The BJP president said the Congress's support base is shrinking drastically, and it is incapable of becoming an alternative to the TRS.

"Is Congress an alternative to the TRS? The Congress under Rahul Gandhi's leadership has not been able to win state elections. Today, if you want to see the Congress, you will have to use magnifying glasses," Mr Shah said.

The Telangana Rashtra Samithi has had failed to keep promises it made to the people of Telangana, Mr Shah said.

"KCR made 150 promises before the 2014 assembly polls but fulfilled not one. He promised he will make a dalit the chief minister but did not honour it. Dalit of Telangana is not on his list. His son (minister KT Ramarao) or daughter (parliamentarian K Kavitha) will be made the chief minister," Amit Shah said.

The BJP chief also raked up the issue of the National Register of Citizens (NRC) in Assam, and said if voted to power again, the Modi government will push every infiltrator out of the country.

"Bring the Modi government again in 2019... Let there be no infiltrator in the country. The Bharatiya Janata Party government will make sure that not a single infiltrator is left," he said.