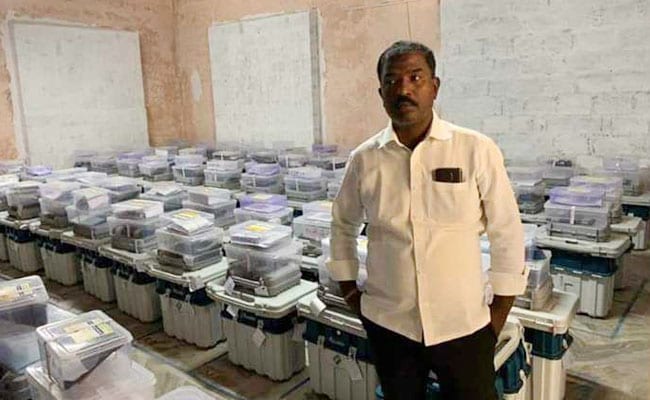 A photograph of a polling agent of Telangana Rashtra Samiti posing inside a strongroom along with the Electronic Voting Machines or EVMs has landed him in jail.

N Venkatesh, the polling agent of Malkajgiri Lok Sabha constituency candidate Marri Rajasekhar Reddy, was seen posing with the EVMs after the first phase of polling in Telangana, on April 11.

He was arrested on Saturday after photographs and video he shot without authorisation at the time of storing EVMs and Voter-Verified Paper Audit Trail (VVPAT) devices at Holy Mary College in Bogaram, went viral.

The police registered a case of criminal trespass and disobedience to order duly promulgated by public servant against Mr Venkatesh.

It is illegal to shoot inside a strongroom or a polling booth. Only election officials and policemen may be authorised to do that.

Marri Rajashekar Reddy, son-in-law of sitting lawmaker and minister Malla Reddy, is up against Congress leader A Revanth Reddy and the BJP's senior leader N Ramchander Rao in Malkajgiri.

With over 31.50 lakh voters, Malkajgiri often referred to as ''Mini India'' due to its diverse population.

Malla Reddy won the seat in 2014 on a Telugu Desam Party ticket and later switched over to the Telangana Rashtra Samiti (TRS) of K Chandrashekar Rao.