Assembly election in Tamil Nadu: This was just one of the many wheels that began to turn or accelerated. The state goes to polls on April 6. 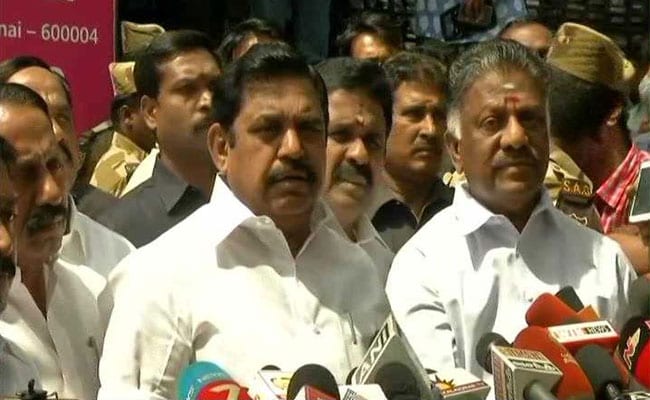 The PMK and AIADMK will begin seat-sharing talks on Saturday. (File)

Minutes before the Election Commission announced the poll schedule for five states, including Tamil Nadu, yesterday, the state Assembly cleared 10.5% reservation for the Vanniyar community in educational institutions and in the appointment of posts in government services. What was not reported then is that the ruling All India Anna Dravida Munnetra Kazhakam (AIADMK) also sealed a poll deal with the Pattali Makkal Katchi (PMK), a party with strong roots in the community that the legislators had just favoured.

This was just one of the many wheels that began to turn - or accelerated - within the larger Tamil Nadu Political wheel. The state goed to polls on April 6 and results will be declared on May 2.

The PMK will contest 23 seats. The PMK, led by GK Mani, has no representatives in the 234-member Tamil Nadu Assembly right now.

"We have settled for less seats as the ruling AIADMK has given 10.5 per cent reservation for Vanniyar," party leader Anbumani Ramadoss said.

The PMK has, for long, fought to promote the interests of the Vanniyars, a powerful trading caste dominant in northern Tamil Nadu. The last time it won an Assembly election was in 2011 - three seats - in alliance with the DMK. It lost even those three seats in the 2016 polls, even though the party had contested in 30. The last time the PMK was in power was between 2006 and 2011 in alliance with the DMK.

"Our expectation is for 60 assembly constituencies, which we have identified as winnable seats. They (AIADMK) may have their plans. The numbers which will be agreeable to both the parties will be announced," senior BJP leader M Chakravarthy told PTI.

The AIADMK, however, is likely to allot around 20 seats to the BJP for the upcoming polls, sources said.

The opposition DMK has meanwhile, formed a seven-member committee under TR Balu for seat-sharing talks with allies. Its second round of meeting with the Congress is set to happen in a day or two, sources have said. They began their talks on Thursday, with the Congress represented by Oommen Chandy, Dinesh Gundu Rao, and Randeep Surjewala, along with some state leaders.

Meanwhile, smaller wheels, too, are turning at their own pace in the state.

Former AIADMK MLA Pala Karuppiah, for instance, has joined actor-turned-politician Kamal Haasan's Makkal Needhi Maiam (MNM) and will be a candidate this time. The thespian's new outfit will release its first list of candidates on March 7. It had garnered nearly 4% votes - up to 10% in some urban pockets - in the 2019 Lok Sabha polls.

Though not major players, parties like MNM and fellow actor-turned-politician R Sarathkumar's All India Samathuva Makkal Katchi (AISMK) can claim their own bases in the state.

On Saturday, Mr Sarathkumar met Mr Haasan and later said, "Met Kamal Haasan as it is nice for like-minded people to meet. We waited for a call from the AIADMK. We are now moving on."

The AISMK founder has been a DMK Parliamentarian in the past and his party has also once been in alliance with the AIADMK.

Intriguingly, he, along with this actress wife Radhika, also met VK Sasikala at her residence on Saturday to mark former Chief Minister J Jayalalithaa's 73rd birthday. Ms Sasikala has just returned to Tamil Nadu politics after serving time for her role in a disproportionate assets case of which the late leader, too, was convicted.

Ms Sasikala, after being ousted from the AIADMK had formed the Amma Makkal Munnetra Kazhagam (AMMK). She has, however, softened her approach of late and said the two parties must contest the upcoming elections together.

Another actor-turned-politician Seeman, who heads the Naam Tamilar Katchi, has also met her on Saturday.