Although orders disallowing assemblies of more than five people are in place, videos appeared to show police facilitating rather than stopping the apparent violation Tamil Nadu has reported around 4.69 lakh Covid cases so far

In what is being seen as a blatant violation of both social distancing norms and prohibitory orders, hundreds of workers of Tamil Nadu's ruling AIADMK dotted a main road in Chennai today as Chief Minister Edappadi K Palaniswami was on his way to the neighbouring Thiruvallur district.

Although prohibitory orders - disallowing assemblies of more than five people - are in place across the southern state, the police can be seen facilitating the apparent violation rather than stopping it.

A police officer in charge of the Poonamallee area told NDTV: "There was no violation. They maintained social distance". However, he refrained from responding to specific questions about prohibitory orders curtailing assemblies of over five people.

AIADMK spokesperson Kovai Sathyan said: "Our cadre was instructed to maintain social distance and they did abide by it".

Residents of the area, however, are not impressed.

"I am in fear. My loved ones and my community has to be safe. A politician is supposed to be a people's representative and should be sensible and sensitive enough to curb such frivolous activities. When they want to fine violators with fines how do they justify this?" Aditi Madhusudhan, Council Head,  Women's Indian Chamber of Commerce and Industry, said. 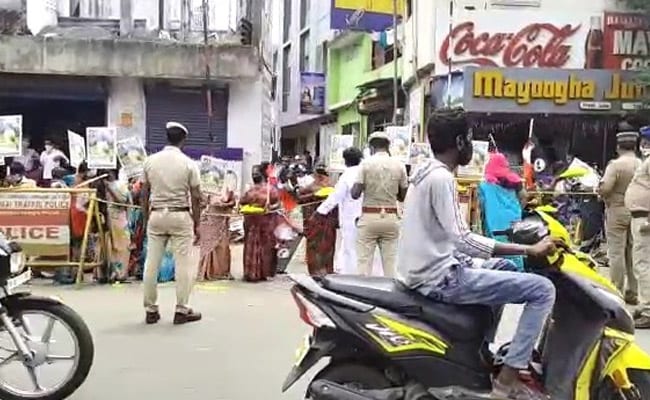 The show of strength - similar to Mr Palaniswami's mentor, the late Chief Minister J Jayalalithaa - amid a pandemic comes just weeks after posters projected his deputy - O Panneerselvam, or OPS - as the party's chief ministerial candidate for Assembly polls due next year.

Jayalalitha twice picked OPS as a stand-in Chief Minister, and he seemed to be the natural choice to succeed the veteran politician after she died in 2016.

Sasikala herself tried and failed to capture the top post; she was convicted in a disproportionate assets case that sent her to jail.

Following this, OPS and ten other MLAs voted against EPS in a trust vote.

Both, however, patched up months later, with OPS becoming the No 2 in the government and EPS taking a secondary post in the party, in a new model of collective leadership.

The compromise marked a shift from the tradition of making the party chief the Chief Minister.

Politics aside, Chennai continues to be a Covid epicentre in Tamil Nadu. Over 1,000 fresh cases are reported every day from the state capital.

Tamil Nadu, which records around 6,000 cases per day, has around 4.69 lakh confirmed cases. 51,215 of these are active infections.