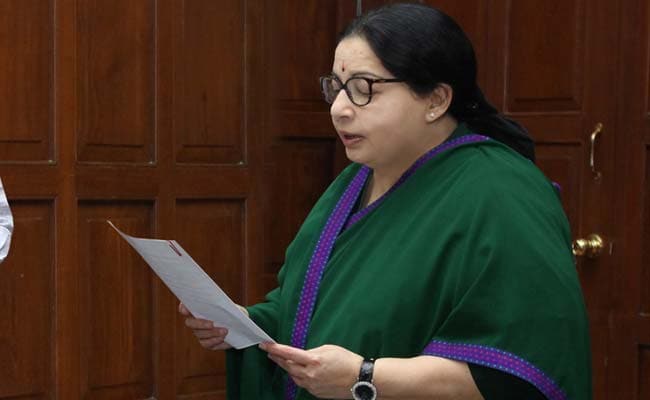 In 2014, a trial court in Bengaluru sentenced Tamil Nadu Chief Minister Jayalalithaa to four years in jail and imposed a Rs 100 crore fine in the disproportionate assets case.

A bench of Justice Pinaki Chandra Ghose and Justice RK Agrawal adjourned the hearing as Karnataka government had sought six weeks time to file its rejoinder to the reply filed by Ms Jayalalithaa and others in pursuance to the notice issued by the court on July 27.

Besides Ms Jayalalithaa, the notice was also to other accused N. Sasikala, VN Sudhakaran, and J Elavarasi. Ms Sasikala was a former aide of Ms Jayalalithaa and Sudhakaran the AIADMK chief's disowned foster son.

In 2014, a trial court in Bengaluru sentenced Ms Jayalalithaa to four years in jail and imposed a Rs 100 crore fine in the disproportionate assets case. But the high court accepted Ms Jayalalithaa's appeal and acquitted her of all charges this year.

The high court, holding the value of Ms Jayalalithaa's disproportionate assets at Rs 2.82 crore, instead of Rs 53.6 crore computed by the trial court, held the amount "not enough" to convict her on corruption charges.

Justice CR Kumaraswamy also acquitted the three co-convicts, sentenced to four years in jail and fined Rs 10 crore each for allegedly amassing wealth disproportionate to their known sources of income during her first term as chief minister from 1991-96.

The high court's order was faulted for glaring arithmetical errors, especially in respect of details of assets, loan raised and income earned.

Ms Jayalalithaa, who was elected from Srirangam in May 2011, had lost her seat and the chief minister's post after the trial court's verdict.

She returned as chief minister after being acquitted.