Police case registered, security tightened in area around the statue in Coimbatore's Sundarapuram area. Police deny links to the recent controversy over a video criticising a popular Hindu devotional song 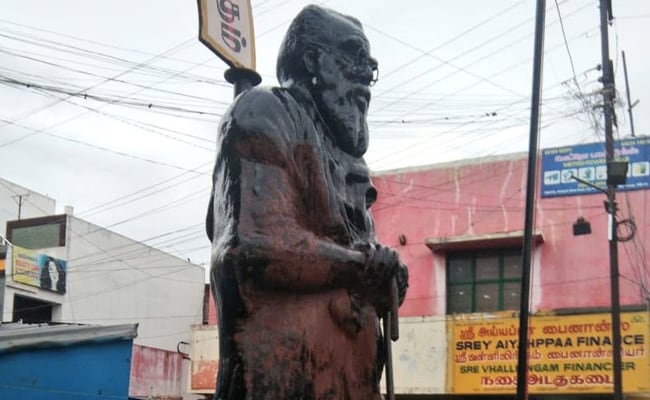 Periyar was an atheist and founder of Tamil rationalist movement, bedrock of its Dravidian politics.

A statue of social reformer Periyar was found coated in saffron coloured paint this morning in Tamil Nadu's Coimbatore city. Followers of the rationalist leader raised slogans demanding the arrest of those responsible, following which police security was increased at the site.

"Red oxide was found poured over the statue in Sundarapuram. It has been washed clean. We have registered a case. Investigation is ongoing, we are working on some clues," Coimbatore Police Commissioner Sumit Sharan told NDTV.

Periyar was an atheist and founder of the self-respect and Rationalist movement, the bedrock of the state's Dravidian politics. During his time, Periyar had campaigned against the existence of God and awakened the spirit of reason and science among the huge Tamil population.

The incident comes close on heels of a controversy over the release of a critical video denigrating popular Hindu devotional song Kanda Shasti by a YouTube channel.

A complaint was filed by the BJP state unit, which stated that the video was slanderous and hurtful to the Hindu sentiment, and that YouTube channel Karuppar Koottam should be blocked. The police have arrested a man allegedly associated with the channel and its programme anchor has surrendered in Puducherry.

The channel had removed the video a few days before the arrest and expressed regret for hurting people's sentiments. A Karuppar Koottam statement clarified that its members were Hindu and its chief coordinator wasn't a person of another religion. "This is only a continuation of what many progressive people have shared on the stage since the days of Periyar," the statement read.

When asked if today's incident could have been stoked by the controversy surrounding the Kanda Shasti video, the Police Commissioner said, "I don't think so. At the moment, there is nothing (to link it). It would become clearer in a few hours."

Reacting to the desecration, MP Kanimozhi of the DMK, the opposition party in Tamil Nadu, tweeted, "Even decades after his demise, Periyar is still the one who sets the narrative. He is not a mere statue, but the path to self-respect and social justice including those who smear him with colours."

In January this year, a statue of Periyar was vandalised near Kancheepuram after Superstar Rajinikanth said that the reformist had taken out a rally in 1971 with nude idols of Lord Ram and Sita. In 2018, a pair of footwear was found over his idol in Tirupur.