Senior AIADMK leader D Jayakumar said he represented the government on the chief minister's direction at the funeral of the departed DMK leader on August 8. 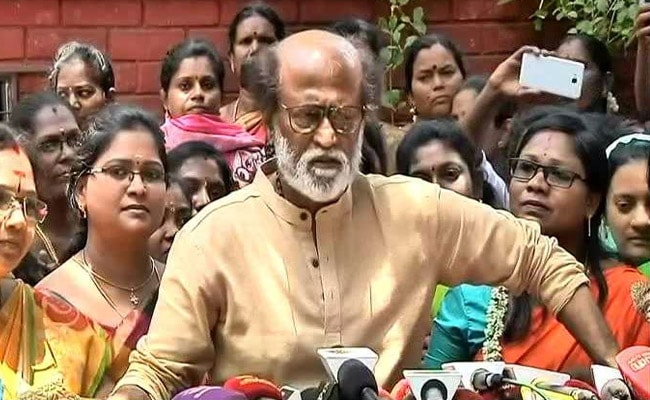 Rajinikanth made the remark on Monday. (File)

The ruling AIADMK today hit out at top actor Rajinikanth for slamming Chief Minister K Palaniswami over his absence from DMK chief M Karunanidhi's funeral and claimed he used a condolence meeting to try to graduate from a "part-time politician" to "full-time" one.

Senior AIADMK leader D Jayakumar said he represented the government on the chief minister's direction at the funeral of the departed DMK leader on August 8.

He said Rajinikanth should not have spoken about politics at the condolence meeting.

"It was a condolence meeting for a departed leader. It is not a healthy thing to have spoken politics there... By speaking politics, it is evident that dear friend Rajinikanth lacks political maturity," he told reporters.

Speaking at the condolence meeting organised by the South Indian Artistes Association for Karunanidhi yesterday, Rajinikanth had said many leaders were present during Karunanidhi's funeral at the Marina.

"For his funeral, the whole of India came. State honours were given by members of the three armed forces. He was given a 21 gun salute.

"But one thing remains. The governor, many chief ministers and Congress president Rahul Gandhi had come. Tamil Nadu's first citizen, the chief minister, shouldn't he have come?

"Should not the entire cabinet have come? What will people think? Are you MGR (AIADMK founder M G Ramachandran) or Jayalalithaa," he had asked.

Both MGR and Jayalalithaa were considered Karunanidhi's rivals.

Hitting out at Rajinikanth for his remarks, Jayakumar said he used the occasion for his own benefit.

"He has used this to try to graduate from a part-time politician to a full-time one.

"His talk was like a seasoned politician. He used the demise of a leader to attract his (Karunanidhi) supporters to himself," he added.