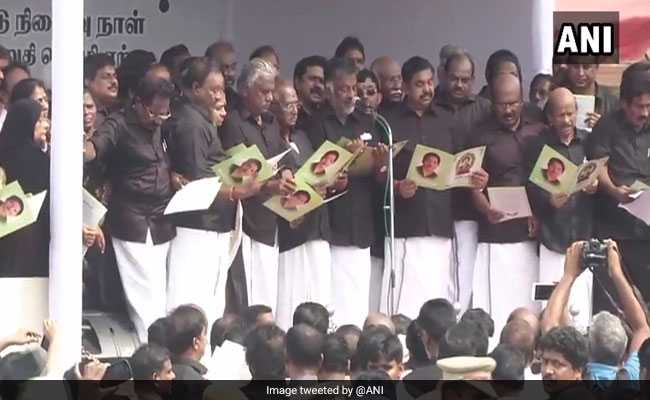 Mr Panneerselvam, who had been one of her loyal supporters and stand-in, administered an oath to party cadre to follow the ideals of Ms Jayalalithaa.

Adored as 'Amma', #Jayalalithaa was one of the most dynamic leaders of Tamil Nadu, who left a legacy for the ages. We remember her on her first death anniversary. pic.twitter.com/7x1LSDNukV

Ms Jayalalithaa, revered as Amma across the state, had died last year after a prolonged illness. The four-time Chief Minister, known for her Amma canteens and a host of other welfare measures, provoked impassioned displays of loyalty.

During her stewardship, the "India's Iron Lady" as her party called her, had steered Tamil Nadu to development and economic growth, making it one of India's richest states.

In 2014, Ms Jayalalithaa was convicted for accumulating cash and property disproportionate to her income during an earlier stint at the top post. She had claimed her salary as the Chief Minister at that time was a token one rupee. After raids on her properties, the police had found, among other things, 10,500 saris, 750 pairs of shoes and a 1.5-kilogram diamond-studded gold belt.

Her trial took place in Karnataka, after the rival DMK had alleged that a fair trial was not possible in Tamil Nadu. Nine months later, she was acquitted and was reinstated as the Chief Minster.

Ms Jayalalithaa's death had unleashed chaos within the party and government as her live-in aide VK Sasikala made a bid to capture power. Though managed to gain control of the party, a clash with O Pannerselvam, who was named the Chief Minister, became inevitable after she reached out for the top job.

Promoted
Listen to the latest songs, only on JioSaavn.com
Ms Sasikala's ambitions came to an abrupt halt by her conviction in a corruption case, but by then the AIADMK had split, with Mr Pannerselvam launching an open rebellion at the Jayalalithaa memorial.

The two factions merged earlier this year after much back and forth. Ms Sasikala was sidelined by Mr Palaniswami, the loyalist she had installed in the top post, meeting one of the two demands of the OPS faction. The government also set up an inquiry commission to probe the circumstances leading to Jayalalithaa's hospitalisation and death, which was the other demand.