After M Karunanidhi's death, DMK announced an election but MK Stalin was the only person to file his nomination at Anna Arivalayam, the party headquarters in Chennai. He was elected party president unopposed. 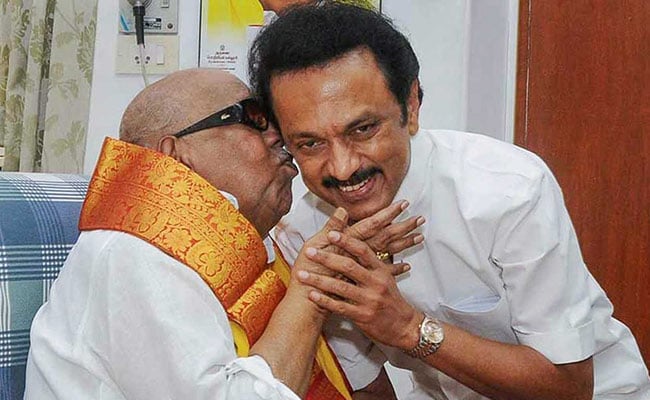 MK Stalin, a former deputy chief minister, and Chennai mayor, was groomed by his father, Karunanidhi.

MK Stalin today took charge as the official boss of Tamil Nadu's opposition DMK, one of the state's two main parties. The chosen political heir of his father and DMK president M Karunanidhi, Mr Stalin has managed the party for more than a year as his 94-year-old father faded out of public life due to failing health.

At the DMK headquarters, black-and-red party flags, music and drumbeats this morning signaled festivities for the first time in days, ahead of a formal takeover by Mr Stalin, the party's second president. Mr Karunanidhi was DMK chief for 49 years.

After Mr Karunanidhi's death, the party announced an election but Mr Stalin was the only person to file his nomination at Anna Arivalayam, the party headquarters in Chennai, on Sunday. He was elected party president unopposed amid chants of "Thalapathy" (commander) and roaring applause.

At a meeting on August 14, senior party leaders urged the ''waiting prince'' to lead them.

Mr Stalin's supporters have dismissed threats by his older brother and rebel MK Alagiri as "rhetoric". Mr Alagiri, who was expelled in 2014, has warned the party of "consequences" if he is not taken back. "Kalaignar is not there now. The party has to be saved and protected," he has said.

Mr Stalin, a former deputy chief minister, minister and two-time Chennai mayor, was groomed by his father. It was Mr Stalin who had led the campaign for the last assembly election. Mr Stalin's gradual elevation and projection as Mr Karunanidhi's successor led to rebellion by Mr Alagiri, who, too, eyed his father's throne.

Mr Alagiri made an appearance at his father's funeral at Marina Beach and claimed that Karunanidhi loyalists were with him. He plans to lead a peace rally to Mr Karunanidhi's memorial on September 5.

The Alagiri-Stalin rivalry has shadowed the DMK for a long time but Karunanidhi kept a fragile peace.

Insiders rule out any possibility of Mr Alagiri's re-entry to the party. Mr Stalin's other big challenge is bypolls in Tamil Nadu for two seats - Tiruparangundram in Mr Alagiri's bastion Madurai and Tiruvarur, his father's seat.

The DMK's candidate in the by-election for J Jayalalithaa's RK Nagar seat lost his deposit and came a poor third after independent candidate T.T.V. Dinakaran and AIADMK leader E. Madhusudhanan.