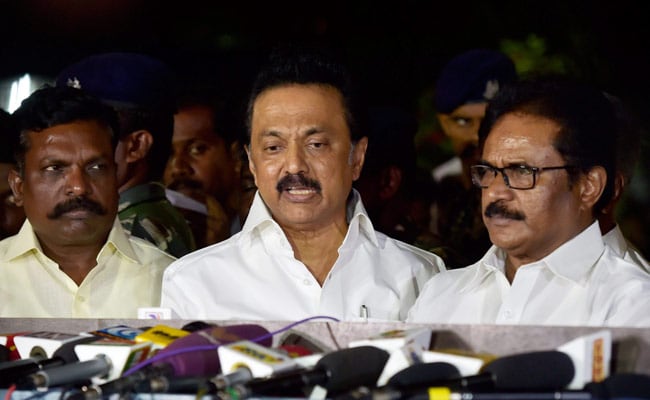 Chennai: Tamil Nadu's leader of opposition MK Stalin today said his party, the DMK, will consider legal options if the Governor does not ask the government of E Palaniswami prove its majority on the floor of the house. After a meeting with Governor C Vidyasagar Rao today, Mr Stalin said he has made a second appeal for a trust vote, since Mr Palaniswami's government is now a minority.

"This is the last time we are meeting Governor. The next time, we go to court," Mr Stalin said, adding they were giving Mr Rao a week's time to convene the assembly for a trust vote.

EPS, as Mr Palaniswami is popularly known, has the support 114 legislators in the 238-member assembly, Mr Stalin said. The opposition, along with the rebel AIADMK faction led by the party's sidelined number 2, TTV Dhinakaran, have 119 legislators, he said. With the seat of former Chief Minister J Jayalalithaa yet to be filled in, the halfway mark in the house is at 117.

Giving the break-up, he said the tally was 89 lawmakers from the DMK,8 from the Congress, one from IUML, which adds up to 98. With 21 rebel AIADMK lawmakers, the total comes to 119.

Last week, TTV Dhinakaran - who has repeatedly claimed that he has no intention of pulling down the EPS government -- had met Mr Rao on a similar errand. After the meeting, his camp too, said they will explore options if the Governor did not provide a positive response.

Mr Dhinakaran's meeting came following a claim by the larger faction led by the Chief Minister that they have the covert support of nine lawmakers from his camp and hence a majority figure of 124. Recently one lawmaker from the Dhinakaran camp had shifted to EPS side.

Promoted
Listen to the latest songs, only on JioSaavn.com
Mr Dhinakaran's supporters had rebelled hours after rival factions of Mr Palaniswami and his predecessor O Panneerselvam had announced a merger after months of bitter negotiations. One of its conditions was the expulsion of VK Sasikala, the party's official chief and Mr Dhinakaran's aunt, who is currently in jail in a corruption case.

The day after, the legislators had met the Governor, demanding that EPS be removed from the state's top post. In what was seen as a coordinated move, Mr Stalin, too, met the Governor the same day, demanding a trust vote in the assembly.