The actor also shrugged off Chief Minister K Palaniswami's prediction that his political career will end in embarrassment, saying that he was "free to express his desire". 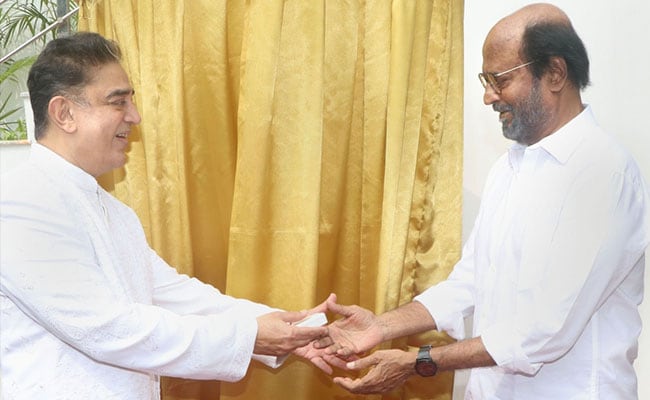 Kamal Haasan and Rajinikanth were contemporaries in the Tamil movie industry.

Actor-turned-politician Kamal Haasan today said that all the good leaders of Tamil Nadu are gone, backing his contemporary Rajinikanth's claim that the state suffers from a "political vacuum".

"We no longer have anybody to provide good leadership. Nobody can deny that there were good leaders in the past, but what we are saying is that there are no such persons now," the Makkal Needhi Maiam founder told reporters at the Chennai International Airport.

Mr Haasan also shrugged off Chief Minister K Palaniswami's prediction that his political career will end in embarrassment. "They are expressing their desires," he said. "Everybody is allowed to express their desires."

Rajinikanth had claimed last week that the state was sorely in need of a powerful leadership, drawing protests from the ruling AIADMK as well as the opposition DMK. While Chief Minister K Palaniswami said Rajinikanth was just an actor and not a political leader, DMK leader Durai Murugan insisted that party chief MK Stalin has already filled that vacuum.

The popular actor, who is expected to float his political party before 2021 assembly polls, had made a similar observation following the deaths of former Chief Ministers J Jayalalithaa and M Karunanidhi in 2016 and 2018 respectively.

Last week, Rajinikanth scorched rumours that he was warming up to the BJP in the state. "The BJP has not made any offer to me to join them. Attempts (are being) made to paint me with BJP colour. Like Thiruvalluvar, attempts (are being) made to saffronise me. I will not get trapped, nor will Thiruvalluvar," he said, when asked to comment on rumours of BJP leader Pon Radhakrishnan inviting him to join the party.

The BJP, which drew a blank in the Lok Sabha elections despite entering an alliance with the ruling AIADMK, is trying to expand its footprint in the southern state.