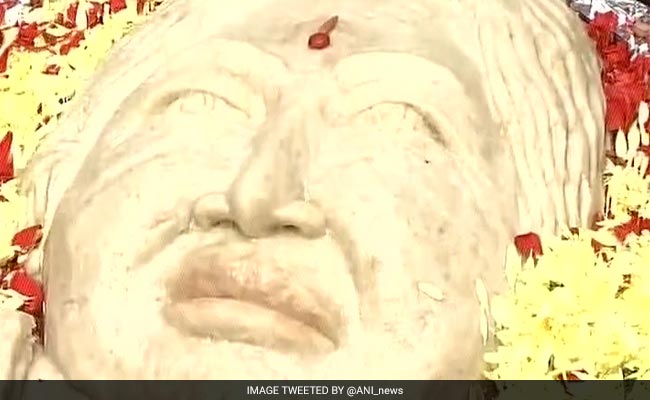 The 68kg idli with Jayalalithaa's face was displayed at Chennai's Marina Beach.

From mass tonsuring to tattoos, late Tamil Nadu chief Minister J Jayalalithaa's supporters are coming up with unique ways to pay homage to the AIADMK chief since her death on December 5. A group of fans today made a 68-kilo idli or a fermented rice cake with Ms Jayalalithaa's face on it. The mega idli was displayed at Chennai's famous Marina Beach, where the political leader has been buried.

Pictures of the gigantic idli has been circulated widely on social media. The images have attracted mixed reactions on Twitter.

The idli is also a synonmous with Jayalalithaa's Amma brand of canteens, which serve subsidised breakfast to lakhs across Tamil Nadu every day.

Tamil Nadu's beloved Amma (mother), was buried at Chennai's Marina Beach on November 6, where lakhs had gathered in an immense but peaceful show of grief.

Promoted
Listen to the latest songs, only on JioSaavn.com
"Amma Vazhga" they chanted (long live Amma) as Ms Jayalalithaa's coffin was lowered to her final resting place. Ms Jayalalithaa's burial, rather than cremation, is seen as in keeping with the Dravidian movement - rationalist and pivoted against Brahmin rituals, a movement whose leaders have dominated Tamil Nadu politics for decades.

Ms Jayalalithaa made political history earlier this year when she was re-elected for a second consecutive term, a practice alien to Tamil Nadu for three decades. She was seen as a powerful if authoritarian administrator who maintained hold over the people's affection despite increasingly rare appearances on account of her health. Much of her appeal lay in her women-friendly giveaways: free mixer-grinders, laptops and other household goods were used to win voters. The rural poor benefited from her many welfare schemes and it was among them that she was most revered with a fervor bordering on the religious.

Tamil Nadu Schools To Reopen Next Week For Classes 10, 12