The bridge connecting Rameswaram in Arabian Sea to mainland India, over two-kilometre-long, is likely to cost Rs 250 crore. 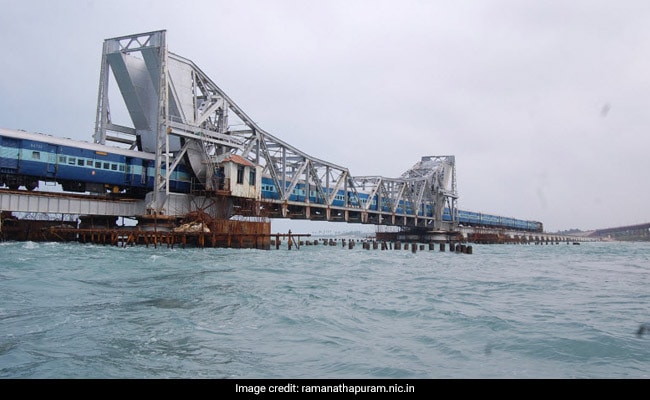 Railways will build the country's first vertical-lift bridge connecting Rameswaram in Arabian Sea to mainland India that will allow ships and steamers to pass through without any hinderance, replacing the existing 104-year-old Pamban bridge, a senior official in the ministry said.

The bridge, over two-kilometre-long, which is likely to cost Rs 250 crore, will have a 63-metre stretch which will lift up while remaining parallel to the deck to allow access to the ships, the official said.

It will be ready in the next four years, and along with the new railway link between Rameswaram in Pamban Island and Dhanuskodi, which is considered the starting point of Ram Setu, will help ferry thousands of pilgrims from the Hindu religious site to the mainland.

The bridge was approved for construction by the railways on Monday.

A cyclone had destroyed the rail link between the two sites in 1964 and since then, this is the first effort to restore the link, the official said.

"The existing bridge having a total length of 2,058 m has already served 104 years and needs to be replaced since it is almost non-operational. While this bridge has the 'Scherzer' rolling lift technology in which the bridge opens up horizontally, to let ships pass through, in the new one, a 63 metre section will lift vertically upwards remaining parallel to the deck. It will be done using sensors at each end," said another official.

It will be three-metre higher than the existing bridge with navigational air clearance of 22 metre above sea level. Because of the vertical lift, full horizontal width of 63m will be available for navigation.

The entire bridge including navigational span will be designed keeping in mind the railways' plan of electrification, the official said.

"In comparison to existing manual operation and control, the new bridge will have electro mechanical controlled systems which will be interlocked with train control systems. Many other new technologies like stainless steel reinforcement, composite sleepers and long life painting system to name a few have been considered in planning of the bridge," he said.