Dr Vijaya Baskar is the fourth former AIADMK Minister to be raided by the DVAC after the DMK government took charge in May. 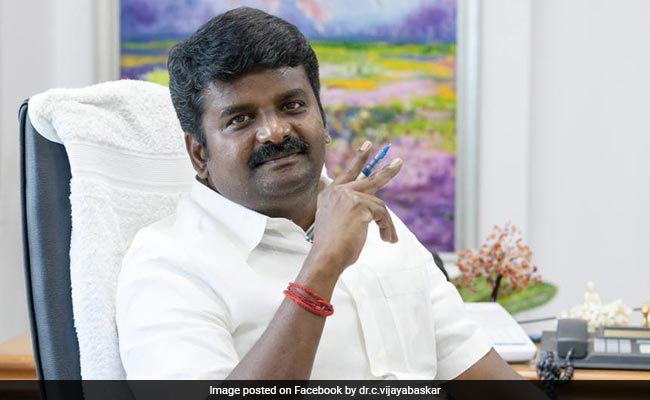 Former Tamil Nadu Health Minister Dr C Vijaya Baskar was raided today by the officials of the Directorate of Vigilance and Anti- Corruption (DVAC) wing of the Tamil Nadu Police over a disproportionate assets case.

Dr Vijaya Baskar is the fourth former AIADMK minister to be raided by the DVAC after the MK Stalin government took charge in May.

A spokesperson of the investigating agency today said: "Searches are going on at 43 places in six districts of Chennai, Coimbatore, Kancheepuram, Coimbatore, Trichy and Pudukkottai."

An FIR alleges the accumulation of assets worth at least Rs 27 crore by the former AIADMK Minister. He was the state's Health Minister for two terms - between 2013 and 2021.

The FIR states Dr Vijaya Baskar had assets worth 6.4 crore in the beginning of the check-in period mentioned.

The DVAC got these details of his assets from his disclosure in affidavits he had filed ahead of polls in 2016 and 2021.  Based on this, they had verified the details before these raids, the FIR says.

The DVAC claims the value of his assets shot up to Rs 57 crore at the end of the check period. Though the income for him and his wife during the period was Rs 58.6 crore, they had incurred total expenses of Rs 34.5 crore.

While they could have saved only Rs 24.1 crore, he had assets worth at least Rs 27 crore in excess.

The allegations were first made by Arappor Iyakkam, an NGO against corruption. "We had raised awareness among public then. The DVAC has now followed it up," said Jayaram Venkatesh, founder, Arappor Iyakkam.

Dr Vijayabaskar was raided by the income tax authorities in 2017 also even when he was Health Minister ahead of the RK Nagar bypolls - the seat was vacated after the death of ex chief minister Jayalalithaa.

Documents suggesting distribution of Rs 89 crore rupees to voters there were recovered then.