Cyclone Gaja is set to make landfall in Tamil Nadu today. The cyclonic storm will hit the Tamil Nadu coast between Cuddalore and Pamban.

The cyclonic storm 'Gaja' is set to make landfall in Tamil Nadu today. The cyclonic storm will hit the Tamil Nadu coast between Cuddalore and Pamban. 'Gaja' that lay over southwest and adjoining southeast and west central Bay of Bengal is about 480 km north east of Nagapattinam and is very likely to cross coast between Pamban and Cuddalore on Thursday evening or night with a wind speed gusting upto 100 kmph, the Met office said.

The state government has taken necessary measures to tackle Cyclone Gaja. Over 30,000 rescue personnel have been placed on standby; the district collectors of Thanjavur, Tiruvarur, Pudukottai, Nagapattinam, Cuddalore and Ramanathapuram have declared holiday for schools and colleges on Thursday. All educational institutions in Puducherry and Karaikal regions would remain closed today in view of the cyclone.

Here are the LIVE updates on Cyclone Gaja: 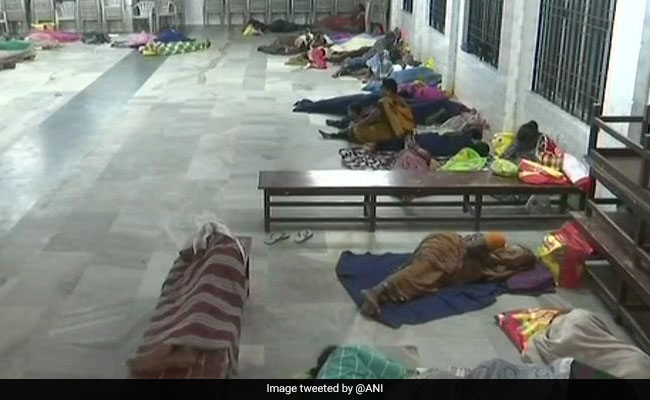 Nov 16, 2018 00:04 (IST)
"Gaja Cyclone now lies at about 80 km southeast of Karaikal, moving at rate of 16 km per hour. It's expected to cross between Vedaranyam and Nagapattinam between 12 am to 3 am," MET official from Chennai Balachandran told news agency ANI. He added that the eye of the cyclone is expected to touch the land within the next hour.
Nov 15, 2018 23:57 (IST)
Private weather monitor Skymet said that rains have hit many parts of Ariyalur, Tiruvarur, Pudukkottai, Perambalur, Thanjavur and Cuddalore in Tamil Nadu. Gaja Cyclone is around 60 kms from the coast, Skymet added.
Nov 15, 2018 23:06 (IST)
Private weather forecaster Skymet Weather said that Cyclone Gaja is around 80 kms from the Tamil Nadu coast. The outer ring of clouds is now covering coast, Skymet said.
Nov 15, 2018 22:43 (IST)
Visuals of rainfall from Nagapattinam in Tamil Nadu. Cyclone Gaja is expected to make a landfall tonight. Nov 15, 2018 22:04 (IST)
Private weather monitoring agency Skymet has predicted light rains over Chennai. "Heavy rains are ruled out for Chennai. You will have a pleasant weather," Skymet Weather said on Twitter.
Nov 15, 2018 21:48 (IST)
Private weather monitoring agency Skymet said that the landfall of Cyclone Gaja is expected between midnight and 1 am tonight. The torrential rains and force winds are expected to hit Nagappattinam, Thanjavur, Tiruvarur, Ariyalur and Pudukkottai districts of Tamil Nadu.
Nov 15, 2018 21:29 (IST)
The outer band of the cyclone has entered the land area near Nagapattinam, nearly 300 km from state capital Chennai.
The state government says it is adequately prepared. More than 6000 relief camps have been opened and eight rescue teams have been put in place.
Nov 15, 2018 21:04 (IST)
Around 12,000 people have been evacuated from coastal Tamil Nadu ahead of cyclone Gaja's landfall. Around 10,692 people are from Nagapattinam district where the landfall is expected to happen.
"The outer band of severe cyclonic storm Gaja has entered the land area," said MeT Director in Chennai Dr S Balachandran. "It still remains a severe cyclonic storm. It would take three to four hours for the eye of the cyclonic storm to make landfall."
Nov 15, 2018 19:21 (IST)
According to the India Meteorological Department, the severe cyclonic storm Gaja over Southwest Bay of Bengal moved further west-southwestwards with a speed of 22 kmph during past 6 hours and lay centred at 11:30am over Southwest Bay of Bengal, about 280 km southeast of Chennai and 240 km east-northeast of Nagapattinam.
Nov 15, 2018 18:20 (IST)
According to Skymet Weather Services Pvt, Cyclone Gaja to weaken before landfall over Tamil Nadu.
Nov 15, 2018 17:55 (IST)
Skymet Weather Services Pvt says Cyclone Gaja is expected to cross Tamil Nadu coast shortly. It has advised people to avoid venturing out in the sea.
Nov 15, 2018 17:36 (IST)
Visuals of heavy rainfall from Cuddalore: 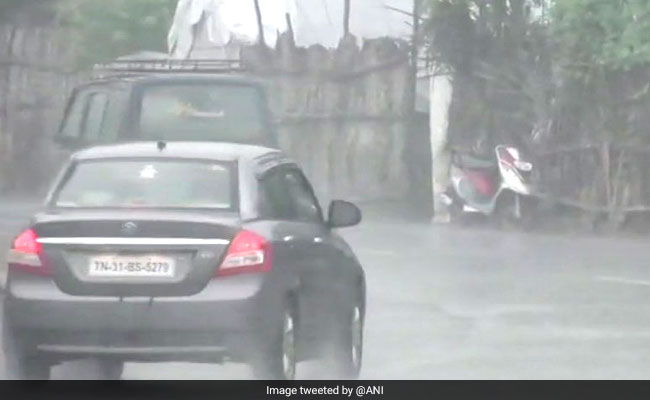 #CycloneGaja, at present located 250km NE of Nagapattinam, moving in southwesterly direction, is expected to have a landfall near Cuddalore, #TN late evening today.
All coastal authorities,disaster response forces,relief teams are positioned to respond effectively. @IMDb@moesgoipic.twitter.com/ORTt7bwRNU

Nov 15, 2018 14:08 (IST)
Cuddalore MLA MC Sambath has held a review meeting with Collector V. Anbuselvan and Disaster Managment Incharge Gagandeep Singh Bedi along with rescue teams here.
"It is expected that Gaja cyclone will make landfall late tonight, maybe in south of Cuddalore in Nagapattinam district. People should be well prepared. The government is making its best efforts in this regard," Mr Bedi said.
Nov 15, 2018 12:50 (IST)
In its Thursday bulletin, the IMD said the cyclone moved at 14 kmph and lay centred over east-northeast of Nagapattinam at 5.30 a.m.
Gaja is likely to move west-southwestwards and cross between Pamban and Cuddalore.
The sea condition is very likely to be rough to very rough along and off Tamil Nadu-south Andhra Pradesh and Puducherry coasts Thursday afternoon onwards, the IMD said.
Nov 15, 2018 10:48 (IST)
The Met department said it would intensify this afternoon and weaken before making a landfall.
Nov 15, 2018 09:28 (IST)
Nov 15, 2018 09:26 (IST)
Two Naval ships Ranvir and Khanjar are on standby to proceed to undertake Humanitarian Aid Distress Relief, evacuation, logistic support&medical aid.Ships will be embarked with additional divers,doctors, inflatable rubber boats,integral helicopters and relief material.
Nov 15, 2018 09:22 (IST)
The district collectors of Thanjavur, Tiruvarur, Pudukottai, Nagapattinam, Cuddalore and Ramanathapuram have declared holiday for schools and colleges today.
Nov 15, 2018 09:21 (IST)
6,000 relief centres have been set up across the state. 10 NDRF teams are on stand by.
Nov 15, 2018 08:50 (IST)
Here's how you can stay safe during Cyclone Gaja
The National Disaster Management Authority has issued safety precautions to handle the effects of the cyclone. 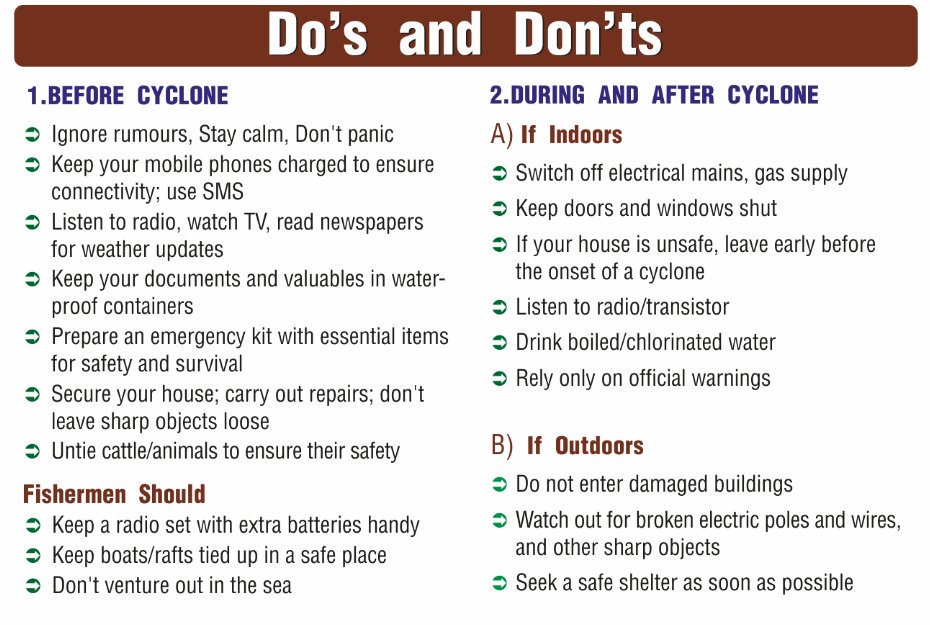 Nov 15, 2018 08:45 (IST)
The Cyclone is expected to reach wind speeds of 90 KM an hour. Schools and colleges in five districts have been closed as a precautionary measure.
Nov 15, 2018 08:40 (IST)
Gaja cyclone is expected to make landfall between Pamban and Cuddalore.The cyclone, MET officials say, would first intensify into a severe cyclone this afternoon and weaken  into a cyclonic storm before landfall.
Cyclone GajaTamil NaduTamil Nadu Cyclone Gaja