MG Ramachandran, aka "MGR", co-stars with PM Modi in the BJP's campaign video for the Vetrivel yatra, which became a flashpoint earlier this week. 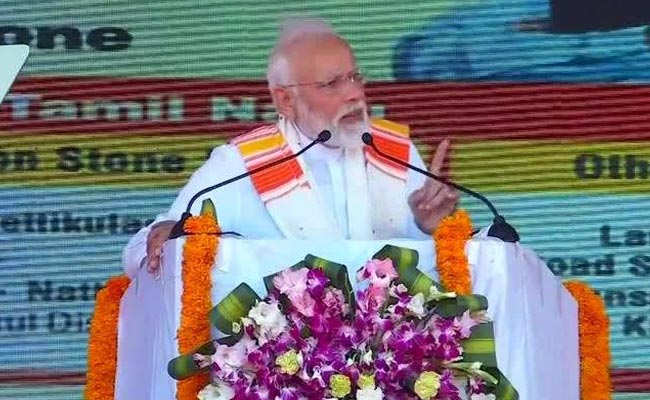 The AIADMK is upset about the BJP using MG Ramachandran alongside PM Modi in a video.

Days after its defiant "vetrivel yatra" in Tamil Nadu, the BJP has given the state's ruling AIADMK, its ally, more reason for angst. The party is reportedly upset about the BJP using its iconic founder MG Ramachandran alongside Prime Minister Narendra Modi in a campaign video.

MG Ramachandran, aka "MGR", co-stars with PM Modi in the BJP's campaign video for the Vetrivel yatra, which became a flashpoint earlier this week.

Despite the AIADMK government banning the yatra over Covid worries, the BJP took out a truncated version of it anyway, even courting arrest. The BJP said its rally - an annual exercise -- was against what it called the anti-Hindu agenda of some parties.

"As far as Vel yatra is concerned, we are not even slightly afraid of the centre. Our ideologies are different...We want Hinduism, Islam, Christianity, Buddhism and all. We want communal harmony," said C Ponnaiyan, a senior AIADMK leader.

The state government has now also cancelled its earlier permission to gatherings of up to 100, prompting an angry reaction from the BJP.

"Hundreds of AIADMK workers were with Chief Minister E Palaniswami at Vellore today as he travelled to Tirupati. Did the police take action? You should first file a case against the Chief Minister. Did you file a case," demanded KT Raghavan, BJP state general secretary.

The AIADMK is considered by the BJP as a friendly party and it has helped the government push legislation through the Rajya Sabha in parliament, where the opposition has an upper hand.

But the party is far from flattered by what it calls the BJP's appropriation of its icon, perhaps in the hope that the goodwill and popularity enjoyed by the movie star-turned-politician will rub off.

Tamil Nadu will vote for a new government in less than six months. This will be the first state election after the death of the tallest leaders of the two main rival parties - J Jayalalithaa of the AIADMK and M Karunanidhi of the DMK - and the BJP senses an opportunity to try and create its space in a major state in the southern part of the country, where the ruling party largely remains a minor player except in Karnataka.

MGR, who founded the AIADMK in 1972, is among the party's most revered figures. Jayalalitha, another towering personality who ruled the party and the state government for many years, was his co-star in films and protege in politics.