Amid Anger Over Death of Techie Hit By Hoarding, AIADMK's Appeal To Party

Subashree's death has led to an outrage against illegal hoardings being put by political parties despite them causing inconvenience and posing a threat to people's safety.

Subashree was on her two-wheeler when an illegal hoarding knocked her down.

Tamil Nadu-based AIADMK and its main opposition party, the DMK, today made an appeal to its party workers to stop erecting banners and hoardings, day after a 23-year-old woman was killed in Chennai after an illegal hoarding fell on her.

Subashree, who worked in an IT firm, was on her way back from office on her two-wheeler when an unauthorised life-size hoarding knocked her down. In seconds, a tanker hit her scooter, injuring her on head.

The woman was wearing a helmet at the time of the accident, eyewitnesses said.

The hoardings, which had pictures of Tamil Nadu Chief Minister E Palanisamy, his deputy O Panneerselvam and former Chief Minister J Jayalalithaa, were put by a local leader of the ruling AIADMK without obtaining permission from Corporation authorities. C Jeyagopal had got the hoardings put up for a family wedding which was attended by Mr Panneerselvam or OPS.

Subashree's death has led to an outrage against the political parties. People claim the banners cause inconvenience and pose a threat to people's safety.

"We are pained at acts that people are affected. Avoid erecting banners and hoardings inconveniencing public in all circumstances," the AIADMK said today without referring to the incident. 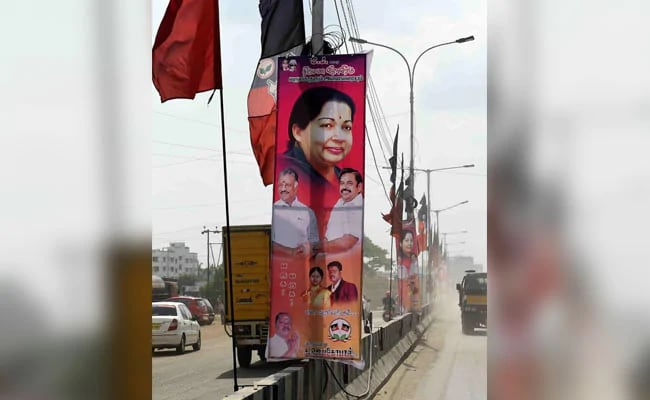 Subashree was her way back home from her office when she met with the accident.

DMK President MK Stalin, meanwhile, warned his party workers that he will not participate in any function if banners or hoardings are put up. He also said strict action will be taken by the party against those who put up hoardings and banners, inconveniencing the public and hindering traffic flow.

"Illegal hoarding placed due to government apathy, irresponsibility of authorities and the police's incompetence has taken away Subashree's life. How many lives are to be sacrificed for these atrocities due to the arrogance of power," DMK chief MK Stalin tweeted in Tamil.

He said one or two party banners could be installed where the party's public meetings and functions are held after getting due permission.

The Madras High Court also came down heavily on the Tamil Nadu government over the incident and wondered "how many more litres of blood the state government needs to paint the roads with" before it takes action.

"There is zero respect for lives. Life lost due to irresponsibility by bureaucrats. Chief Minister and all political parties ought to call to end   banners and hoardings. Do political parties have extra constitutional powers," it observed.

Subashree's death has led to an outrage against illegal hoardings being put by political parties despite them causing inconvenience and posing a threat to people's safety.

Following its complaint, police have registered a case against the AIADMK functionary and action will be taken as per law, the Chennai Corporation said adding the printing unit which printed the hoarding that fell on Subashri has been sealed.