2 Dead In Stampede During Festival At Madurai's Meenakshi Temple

Madurai stampede: The Chithirai festival being held in Madurai with the participation of devotees after two years' gap, people started swarming since early hours. 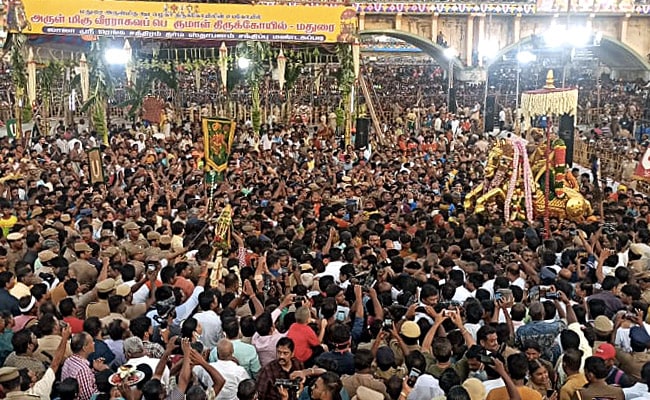 Madurai stampede: A Rs 5 lakh assistance has been announced for the families of the two dead persons.

Tamil Nadu Chief Minister M K Stalin announced an assistance of Rs 5 lakh each to the families of two persons, who lost their lives in a stampede during the 12th day festivities of the annual Chithirai festival in Madurai on Saturday.

The 15-day event, which commenced on April 5 at the renowned Sri Meenakshi Sundareshwarar temple, saw lakhs of devotees crowding the Vaigai river bank from 4 am today to watch the grand entry of Lord Kallazhagar into the river.

The Lord, adorned in green silk robes and mounted on His golden stallion, entered the river after 5.30 am, said sources in the temple. This event, coinciding with Pournami, is observed two days after the celestial wedding of Goddess Meenakshi with Lord Sundereshwarar on April 14, marking the 10th day festival.

With the Chithirai (April-May) festival being held with the participation of devotees after two years' gap following the coronavirus induced lockdown, people started swarming since the early hours to obtain closer view.

A man and a woman died in the stampede and one person was grievously injured. About seven people who sustained injuries were admitted to Government Rajaji hospital in the temple city.

"The news about the tragic incident caused great agony," the Chief Minister said and expressed his heartfelt condolences and sympathies to the bereaved family members.

He announced an assistance of Rs 5 lakh each to the families of the two persons who died, Rs 2 lakh to the grievously injured besides Rs one lakh each to those who sustained simple injuries from the Chief Minister's Public Relief Fund, and ordered the disbursement of the relief immediately, an official release said.