Srinagar: Zubair Ahmad said that if he gets resources, he can create something from snow that world would see. 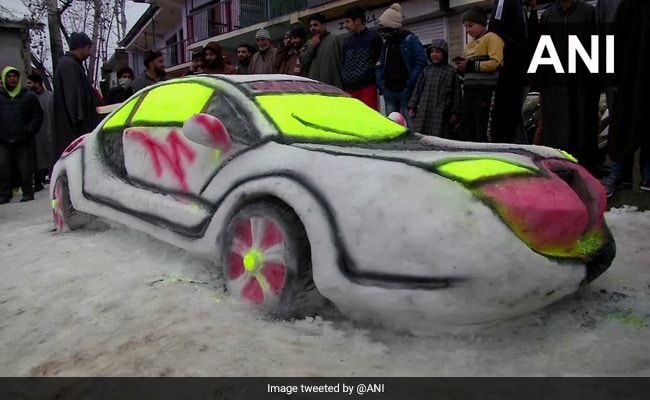 Zubair Ahmad made a snow car that saw many excited visitors.

Jammu and Kashmir's Zubair Ahmad is making the best use of snow time in Sringar. The young man has created a beautiful car using snow and it has become a sight-seeing spot for many residents there. Excited visitors were seen clicking pictures with the "snow car".

"I have been doing this since childhood. I can build anything using snow, even the Taj Mahal," Zubair Ahmad was quoted as saying by news agency ANI.

"I just need resources. I want to create something for the world to see," he added.

Zubair Ahmad is in the business of car accessories.

J&K: A Kashmiri youth, Zubair Ahmad has made a 'snow car' that is garnering the interest of locals in Srinagar. He says,"I've been doing this since childhood. I can build anything using snow, even Taj Mahal, I just need resources. I want to create something for the world to see". pic.twitter.com/5VcHOPRK4U

According to the weather department, the minimum temperature in Srinagar would be -3 degrees while the maximum temperature would be 5 degrees Celsius. Rain and thunderstorm is also expected in the state, the India Meteorological Department said.

Chillai-Kalan, a 40-day long period of extreme cold in Kashmir, began on December 21 and will continue till January 31 followed by Chillai-Khurd and Chillai-Bachha.