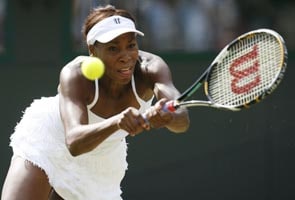 Injury-stricken Venus Williams crashed to a second defeat in as many days in Hong Kong on Friday as her march to the Australian Open was overshadowed by questions over her fitness.

The seven-time Grand Slam winner was seen clutching her stomach as she was dismissed in straight sets by Chinese ace Li Na in the World Team Challenge Friday.

Williams played her cards close to her chest after the match as she was quizzed about her physical condition ahead of the year's first Grand Slam, starting September 17.

Asked about the apparent stomach problem in a post-match press conference she appeared to avoid the question, saying: "I just tried my best and just pushed myself to play my best tennis."

Williams, 30, suffered a nagging left knee injury last year, being forced into a long lay-off after losing to eventual champion Kim Clijsters in the US Open semi-finals in September. She had not played before that since falling in the Wimbledon quarter-finals in June.

Asked how her knee was bearing up, she replied, without elaborating: "I'm okay, thanks."

On court Williams had the balance in the baseline battle early on, despite playing well below her best, but her opponent was more consistent, hitting more winners and aggressively attacking the American's second serve.

"I enjoy playing here, I love the fans her supporting me. I'm looking forward to coming back next year," Li said after the match.

Li, a semi-finalist at the Australian Open and quarter-finalist at Wimbledon, looked the more composed for much of the match, taking the ball cleanly and stepping into every shot.

Li, who led China to the Asian Games women's tennis team gold in November, vowed on Friday to improve her game in the Australian Open by presenting a "poker face" to her opponents and showing no emotion on court.

The consolation silver group final, between the Americas and Asia-Pacific, consists of three singles matches and one doubles match, to be played on Saturday.

Earlier US world number 61 Melanie Oudin made up for a disappointing defeat on Thursday by dismissing Hong Kong's top woman Zhang Ling in straight sets.

Oudin broke Zhang twice in the first set and three times in the second for a comfortable 6-3, 6-1 victory.

But Team Asia-Pacific nudged ahead through Mark Philippoussis of Australia who beat seven-time Grand Slam champion John McEnroe of the United States 6-4, 6-4 in the "legends" rubber.

In the final clash of the evening, France's Aravane Rezai was due to take on Russian Maria Kirilenkoe with top seeds Europe vying for the gold group singles title against second-seeded Russia.
Comments
Venus WilliamsHong KongLi Na