Somdev gets wildcard for Australian Open 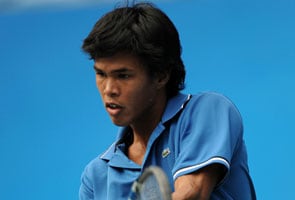 Indian tennis star Somdev Devvarman will not have to go through the qualifiers to play in the singles main draw of the Australian Open as Tennis Australia (TA) on Thursday awarded him a wildcard entry into the first Grand Slam of the season.

It will be Somdev's first appearance in the main draw of Australian Open, starting from January 17, as he had failed in his earlier two attempts to clear the qualifying round.

Kei-chen Chang from Chinese Taipei is the other Asian to get the wildcard.

Somdev is currently ranked 108, just outside the Australian Open cut-off of 105.

In 2010, he won a Challenger event in Turkey and also reached the semifinals in Aptos and qualified for both the Cincinnati Masters and the French Open.
Comments
Somdev gets wildcard for Australian OpenAustralian OpenGrand SlamSomdev Devvarman