Nervy Sharapova into Open second round 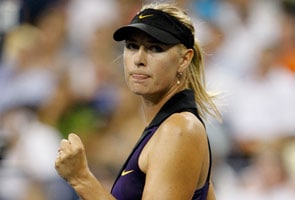 Melbourne: Former Australian Open champion Maria Sharapova recovered from some shaky moments against Thailand's Tamarine Tanasugarn to cruise into the second round 6-1, 6-3 on Monday.

The 2008 winner lost her opening service game to the 33-year-old Tamarine but hit back to win the next six games, wrapping up the first set in just 26 minutes.

The glamorous Russian broke again in the first game of the second set before going off the boil, dropping the next three games to go 3-1 down.

Tamarine had game points to make it 4-1 but Sharapova, seeded 14th, fought back, breaking her former doubles partner to get the set back on serve.

She dominated the rest of the match to become the first seeded player into the second round, where she will face either fellow countrywoman Elena Vesnina or Frenchwoman Virginie Razzano.

Sharapova has already improved on last year's performance, when she was a first-round loser against fellow Russian Maria Kirilenko.

"I was definitely a little bit nervous in the beginning," Sharapova said.

"Last year I played the first match on centre court and I lost, so I was like, I don't want this to happen again this year.

"The first game definitely wasn't great, and I didn't serve good at all during the match.

"I started playing better as the match went on, and I can only improve in the second one."

Sharapova has struggled to reproduce the form that brought her three Grand Slam titles, after an operation on her right shoulder in October 2008.

The 23-year-old's slow recovery suffered another setback this month when she was beaten by unheralded Hungarian Greta Arn at the WTA tournament in Auckland.

"I wish I could be number one in the world today," Sharapova said.

"But I think everything is a process, it really is. Now it's a challenge of trying to get back to where I want to be."

Elsewhere French Open champion Francesca Schiavone survived a tough work-out against Spaniard Arantxa Parra Santonja to book her place in the second round.

The fifth-seeded Italian lost the opening set as Parra Santonja blazed away with a succession of clean winners, keeping Schiavone under constant pressure.

But the gritty Italian attacked in the second, breaking Parra Santonja twice to level the match at one set apiece.

The third set went with serve until Schiavone broke to make it 5-4, but she then faltered when serving for the match, giving the break straight back to the Spaniard.

However, Parra Santonja cracked while serving to stay in the match, handing the first round tie to a relieved Schiavone 6-7 (4/7), 6-2, 6-4.

The Australian Open women's draw has been blown wide open by the injury withdrawal of five-time champion Serena Williams, with Sharapova among seven Grand Slam winners in the field.