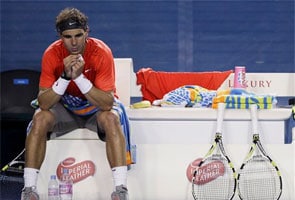 The defeat ended Nadal's bid for a fourth straight non-calendar year Grand Slam victory. Only Don Budge and Rod Laver have held all four titles at the same time.

Nadal looked troubled by a strapped left hamstring injury which he appeared to pick up in a drawn-out second game of the match, and needed medical timeouts to see out the 2hr 33min match on Rod Laver Arena.

It was seventh seed Ferrer's fourth win over Nadal in 15 encounters and he will now play British fifth seed Andy Murray in Friday's semi-final.

It will be Ferrer's second Grand Slam semi-final after he reached the last four at the 2007 US Open.

"It's not easy because Rafael is a gentleman and he was playing injured and we are friends," Ferrer said.

"He was injured in the first set but I played my game, I fight a lot and sometimes it's not easy."

Nadal dug in and played the match and stayed on court in respect for his friend Ferrer and to give him the satisfaction of beating him on the court and not via an injury retirement.

It was deja vu for the top seed, who pulled out during his quarter-final on the same date at last year's Australian Open with a knee problem.

Nadal was struggling throughout the opening set and was broken three times by Ferrer, but appeared to move more freely in the second set when he broke Ferrer's second service game.

But Ferrer secured a triple service break to claim the second set and a stranglehold on the match against the stricken Nadal.

Ferrer again broke Nadal's opening service in the third set as the inevitability of defeat loomed to end his dream of his fourth straight Grand Slam.

Nadal's service was broken a total of seven times, while Ferrer hit 44 winners to Nadal's 19. The top seed struggled with 34 errors.

It had been a troubled tournament for the Spanish superstar who arrived with a virus he picked up in Doha on the way to Australia.