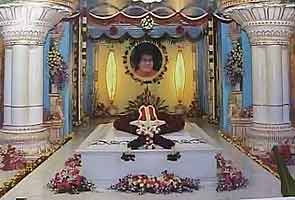 Puttaparti: The first death anniversary of Sri Sathya Sai Baba was observed in Puttaparthi with the devotees of the late spiritual guru offering prayers at Prasanti Nilayam here.

An 'Aradhana Mahotsavam' (a programme to offer prayer) was held at the Prasanti Nilayam, the abode of Sathya Sai Baba.

Picking relevant anecdotes from his story and the lives of some devotees, the students of the Sri Sathya Sai Institute of Higher Learning narrated several incidents from the life of Baba to highlight his love and compassion.

Andhra Pradesh Governor E S L Narasimhan was the chief guest at the programme who described Baba as the Sun, who shines all the time without any beginning and end.

"He (Baba) is eternal. Sun grants happiness to everyone without any discrimination and Bhagwan is the same, granting happiness to the entire creation," a release quoted him as saying.

Referring to Baba's physical absence, the Governor said that Baba is someone whom one should experience.

He promised to the audience that the government would do all that it can for the people of the state.

"This is not an occasion to grieve, but to rededicate to Baba's mission which is ever expansive," Mr Srinivasan said.

Pointing out that all the Sai institutions founded by Baba continued to function as it were, when he was physically present, Mr Srinivasan said the new campus of Sai institute of higher learning coming up at Muddenahalli has been cleared by the Centre.

He also mentioned about the Trust's new initiative in expanding its coverage of water project providing drinking water to another 118 villages in Anantapur district costing additional Rs 80 crore.

The Governor released a book 'Miracle of Pure Love' authored by Prof G Venkataraman on the occasion. Excerpts from Baba's divine discourse followed.

Promoted
Listen to the latest songs, only on JioSaavn.com
Sathya Sai Baba passed away on April 24 last year after prolonged illness.