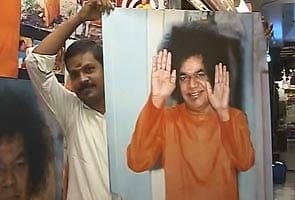 Hyderabad: Puttaparthi town in Anantapur district is gearing up for the first anniversary of the passing away of Sathya Sai Baba, who had millions of devotees around the world.

Prashanti Nilayam, the ashram and now the final resting place of Sai Baba, will witness a series of programmes to mark the occasion and Sathya Sai Central Trust, which runs the massive spiritual empire, expects 30000 to 50000 people for the anniversary.

This is expected to be the biggest gathering after the holy figure passed away on April 24 last year at the age of 85 following prolonged illness.

Titled "Sri Sathya Sai Aradhana Mahotsavam", the three-day programme will begin on April 23 with a colloquium on 'experiencing the divide from the form to the formless'.

On the second day, a book on Sai Baba would be released. Governor ESL Narasimhan would be the Chief guest. There will also be recitation of the vedas, bhajan, mangala arathi and a cultural programme in the evenings on all three days.

The trust has not yet finalised plans on installing a statue in Sai Kulwant Hall, where Sai Baba was buried. A section of trustees is not in favour of it.

According to Anantharaman, the trust was considering new initiatives like extending the Anantapur Water project to 119 more habitations at a cost of Rs 75 crore, enlargement of hospital insfrastructure and addition of a new campus for the university. It also plans enlargement of disaster relief work and building more schools in different parts of India.

Unmindful of the controversies soon after Sai Baba passed away, the trust is carrying on its philanthropic work.

Due to the controversies, the state government at one point was considering intervention.

However, the trust succeeded in convincing the government of its commitment to take forward Sai Baba's work.

In June, police had seized Rs 35 lakh amid allegations by a section of devotees that huge amounts of cash and valuables were exported out of the pilgrim town soon after Baba passed away.

However, the trust denied the allegations and clarified that the money belonged to some devotees, who had donated it for Samadhi work.

The same month, the trust opened Yajur Mandir, the personal chamber of Sai Baba. The trust declared that it found Rs 11.56 crore, 98 kg of gold and gold jewellery and 307 kg of silver articles inside.

Following allegations of financial impropriety and lack of transparency, the government had sought a report from the trust on its activities. It was the first time since Sai Baba set up the trust in 1972 that the government intervened in its affairs.

For the first time since its inception, the trust released an annual financial report in November. It, however, contains only the expenditure the trust incurred on its activities.

Sathyanarayana Raju, who later became famous as Sai Baba, at the age of 14 (in 1940) had claimed that he is an avatar of god. He claimed that he is reincarnation of the great saint, Shirdi Sai Baba. In 1963, Sai Baba declared that he will incarnate as Prema Sai in Mandya district of Karnataka.

Promoted
Listen to the latest songs, only on JioSaavn.com
In the 1990s, he stopped performing miracles after rationalists accused him of fraud. Since then he had been focusing on social and charitable work and his devotees include several heads of states, top businessmen and celebrities.

His devotees still throng Puttaparthi and seek his blessings. Though the number of devotees has come down, the trust says it is his message of peace and selfless service which is more important.
Comments
PuttaparthiSathya Sai BabaSathya Sai Baba's death anniversary

No Need To Panic, Have To Live With Virus: BS Yediyurappa To Bengaluru