Recovered from Hyderabad ruins, a veritable treasure of gold 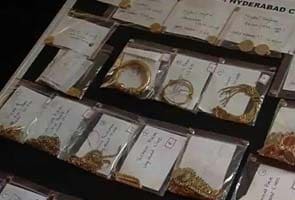 Hyderabad: Gold ornaments, silver jewellery and artefacts, coins from the time of Shahjahan, Akbar and even the Roman Empire - all this was recovered from an old house being demolished in Doodhbowli area of Hyderabad's Old City.

"1690 grams of gold, 4200 grams of silver, 490  and coins worth one and a half crores, but if we take their antique value, Archaeological Survey of India estimates it at 5-7 crore rupees,'' Hyderabad police commissioner Anurag Sharma said.

According to experts, the precious ornaments have been crafted during the regime of Moghuls, Nizam Nawabs and others, and have archaeological and historical importance. Some gold coins belong to the Moghul period and some are from ancient Roman times.

The house was inherited by Satish Kumar from his grandfather, late Vishwanath, who purchased it 50 years ago from two brothers, Prem Raj and Anand Raj.

Mr Kumar gave the contract to demolish the house to labour contractors Mohammed Rafeeq and Mohammed Abdul Bari in October. When they found the treasure hidden in a wall, they decided to keep 80 per cent of it themselves and shared the rest with labourers to ensure they didn't disclose the secret.

The find received public attention when one of them attempted to sell a piece of antique jewellery.

The Hyderabad Commissioner's Task Force arrested five of the seven people who were reportedly involved in the theft.

Promoted
Listen to the latest songs, only on JioSaavn.com
Under the Treasure Trove Act, neither the finder nor the owner of the house can claim any right over the find as the Act specifies that the entire find belongs to the government.