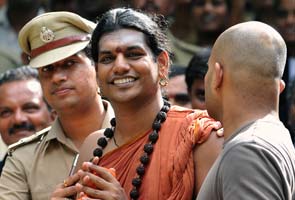 Bangalore: A court at Ramanagar on Wednesday granted police permission to subject controversial self-styled godman Nithyananda to a medical test as sought by the CID in a sex scandal case in 2010 reportedly involving him.

The CID had approached the court at Ramanagar, about 40 km from Bangalore, for permission to subject Nithyananda to medical tests, including a blood sample and also a voice test.

Nithyananda is facing a CID probe into allegations of rape and criminal intimidation levelled against him in 2010 after some TV channels telecast purported video footage of the self-styled godman in a compromising position with an actress.

Out on bail after his arrest in 2010, he had courted fresh trouble on June 8 when police booked him and his followers for allegedly assaulting a media person during a press conference at his ashram at nearby Bidadi.

The press meet was held in the backdrop of a US-based woman alleging that Nithyananda had sexually abused her for five years, a charge that triggered public outrage and protests by Kannada groups.

Nithyananda was arrested on June 13 after he appeared before a court to surrender in the assault case and was on June 14 slapped with a fresh case of disturbing peace, leading to his arrest for the second time.

He was granted bail by the district executive magistrate on June 15, a day after he was re-arrested on charges of disturbing the peace.

Promoted
Listen to the latest songs, only on JioSaavn.com
Meanwhile, members of various organisations went on a padayatra from Ramanagar to Bidadi and from there to the state secretariat here, demanding Nithyananda's removal from Karnataka for his involvement in 'objectionable activities'.