Nandan Nilekani to be Congress candidate from Bangalore South: sources 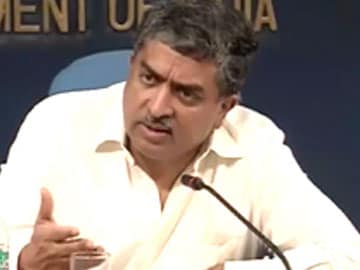 New Delhi/Bangalore: The Congress has reportedly decided that it will field Nandan Nilekani as its candidate from the prestigious Bangalore South constituency in the general elections this year, against the present legislator and political heavyweight, the BJP's Ananth Kumar.

Mr Nilekani, the billionaire head of the Unique Identification Authority of India or UIDAI and a cofounder of IT giant Infosys, has said several times that he is ready to contest elections and has just been waiting for the Congress to make up its mind on his candidacy.

There are reports that some leaders in the Karnataka Congress are against giving a Lok Sabha ticket to the former software czar, but they are unlikely to go public with their opposition as the Nilekani decision, as yet an informal one, is seen as having come from the desk of Rahul Gandhi, recently appointed the party's campaign-in-chief.

Bangalore South, a middle-class constituency, is a tough nut to crack for the Congress, which has fared poorly here since the late 1970s. Ananth Kumar, a BJP General Secretary and member of its top panel of leaders, has won five times from here.

"I am interested in doing something on the political front mainly because India needs a lot of change... given a ticket, yes I will contest," Mr Nilekani had said earlier this month.

He said he would like to join the Congress as it is "a party dedicated to long term reforms."

Promoted
Listen to the latest songs, only on JioSaavn.com
The 58-year-old is in charge of the government's massive Aadhar scheme.

He quit as the Chief Executive Officer of Infosys, one of the most high-profile jobs in India Inc, in 2009 to take over as chairman of the UIDAI, which is implementing the Aadhar identity cards scheme to allow the poorest to receive benefits directly from the government. When complete, it will be the world's largest biometric database.