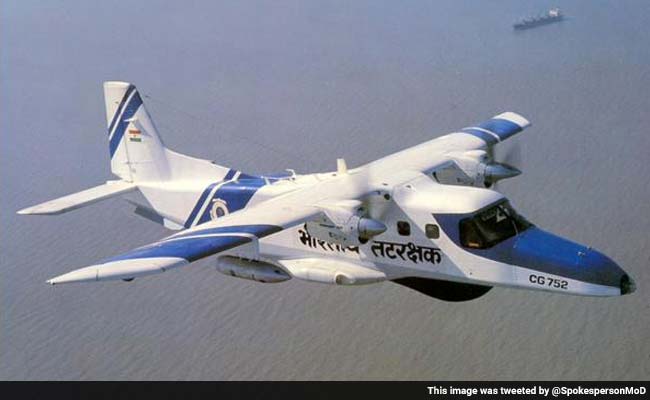 File picture of a Dornier aircraft operated by the Coast Guard.

Three days after a Dornier aircraft of the Coast Guard went missing off Chennai, the search operations team detected an oil spill near the Karaikal Coast on Thursday.

The Indian Oil Corporation has sent the water samples to determine whether it is aviation fuel or  diesel used by fishing boats.

"The oil layer was spotted close to the probable area of crash. The water sample has been sent for analysis," said Coast Guard Commander SK Sharma.

The Navy and Coast Guard have extended their search by around 125 kilometres from the coast off Karaikal to Chennai."The wind movement is towards this side and we've positioned ourselves here so we could locate any wreckage that may move this way," Mr Sharma added.

Fifteen ships belonging to both the Coast Guard and the Indian Navy are a part of the search mission, in addition to the advanced Boeing Poseidon P81 surveillance aircrafts, which are known for their maritime surveillance capability.

A submarine heading towards the Tamil Nadu coast will join the search operation tonight. Two other highly-specialised ships with Sound Navigation And Ranging (SONAR) technology are expected to arrive by noon.

"These have under water search capabilities which would make it easier to locate if there's any debris below the sea," added Commander Sharma.

The Dornier that took off from Chennai on Monday evening was last tracked 16 kilometres east off Chidambaram coast by radar in Trichy. The surveillance aircraft was on a regular sortie to monitor the Tamil Nadu coast and the Palk Bay.

The Navy and Coast Guard have extended their search by around 80 miles from the coast off Karaikal to Chennai.

On Wednesday, the Director General of Coast Guard, Vice Admiral HCS Bisht reviewed the search operations and also visited the families of the missing personnel.