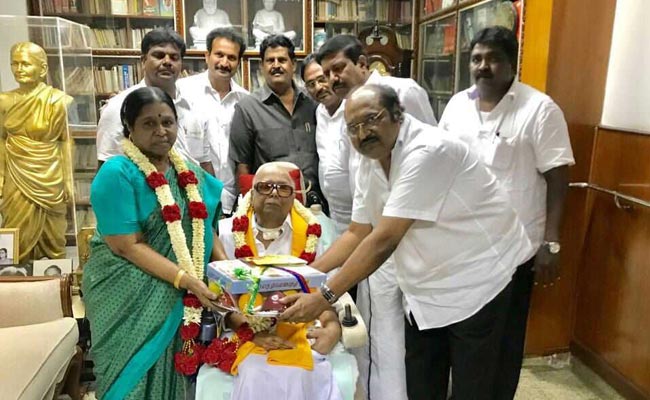 Karunanidhi on his 95th birthday in Chennai

Chennai: Celebrations are low key for the second consecutive year as DMK supremo M Karunanidhi turned 95 today. For more than a year the DMK patriarch has been confined to his home due to age related health conditions.

The party has planned month-long events across the state to mark Karunanidhi's birthday. On Sunday, the area around his residence in Chennai's Gopalapuram, was decorated with flowers and the symbolic banana trees for healthy life. Karunanidhi met party supporters outside his house.

Chennai: M Karunanidhi meets DMK workers outside his residence in Gopalapuram on his 95th birthday pic.twitter.com/19CkNroifF

Best wishes to Kalaignar M.Karunanidhi Ji on his birthday. A prolific writer, poet, thinker and orator, Karunanidhi Ji is one of India’s senior most political leaders. May he be blessed with a long and healthy life. @kalaignar89pic.twitter.com/BnZJUA4kjJ

Warmest birthday greetings to M Karunanidhi @kalaignar89 Ji. I pray for your good health and happiness

Karunanidhi, in his six-decade-long career in politics has never lost an election. He had undergone a tracheotomy in December 2016, to improve his breathing. His younger son MK Stalin is now the working president of the party and his daughter Kanimozhi, a Rajya Sabha Member of Parliament, also looks after party affairs.

Promoted
Listen to the latest songs, only on JioSaavn.com
Karunanidhi has been granted a leave of absence from the Tamil Nadu Assembly due to his health.

The DMK, which has been boycotting the Tamil Nadu assembly, demanding permanent closure of Sterlite's copper unit has decided to attend the house from Monday. Last week the party held a model assembly session at its headquarters, for what it called, to demonstrate how the assembly should be held.