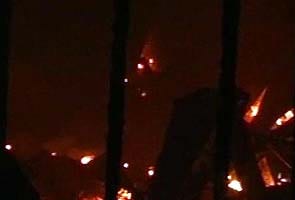 Hyderabad: Andhra Pradesh Chief Minister N Kiran Kumar Reddy on Friday inspected the hangar at Begumpet Airport that was destroyed in a fire earlier this week.

The state government's Agusta Westland AW-139 helicopter, used by the Chief Minister and other VIPs, and six small aircrafts belonging to the AP Aviation Academy were reduced to ashes in the incident.

The Chief Minister, upon his return from a day-long trip to Warangal, went round the accident site and enquired about the reasons that caused the fire, a press release from the CMO said.

Senior aviation officials and security personnel briefed the Chief Minister about the incident.

Promoted
Listen to the latest songs, only on JioSaavn.com
A three-member committee appointed by the state government and headed by Special Chief Secretary I Y R Krishna Rao, is investigating the reasons that caused the fire while the Crime Investigation Department is investigating the case from various angles, including possible sabotage.