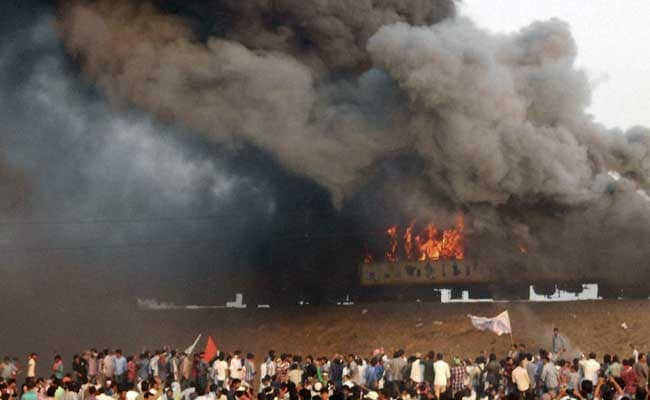 Hyderabad: Police have registered 63 cases in connection with the violence that had erupted in East Godavari district of Andhra Pradesh last Sunday during a meeting by Kapu community members, who sought reservation under Backward Class category, a top officer said.

Kapu leader and former minister Mudragada Padmanabham, has been named as the prime accused in these cases for allegedly openly instigating the community members and agitators, who set the Ratnachal Express and Tuni Police Station on fire on January 31 during the 'Kapu Aikya Garjana', demanding reservation.

"A total of 63 cases have been booked in connection with the violence. Cases have been registered against Padmanabham and others. He is accused number one in every case," a top police officer of Andhra Pradesh told PTI today.

"Investigation is still going on in the case," he said.

The agitators, who had gathered at Tuni town of the district to attend the public meeting addressed by Padmanabham, pelted the engine of the Express train with stones and also attacked police personnel before ransacking the railway station. Four bogies of the train were also set ablaze.

The protesters, who were in thousands, had also blocked the national highway, connecting Kolkata and Chennai.

A total of 15 policemen, including a senior district police officer, were injured in the violence.

Meanwhile, East Godavari district Superintendent of Police Mesala Ravi Prakash said as many as 150 people have been identified in connection with Sunday's violence.

He said Kapu leader Mudragada Padmanabham has planned to launch an indefinite fast from February 5 at his residence in Kirlampudi in East Godavari district.

"In view of Padmanabham's planned indefinite fast, security has been beefed up in and around Kirlampudi and other important places in the district," Mr Ravi Prakash added.