As the earth gets hotter, turtle hatchlings worldwide are expected to skew dangerously female, scientists predict, making the animals an unwitting gauge for the warming climate. 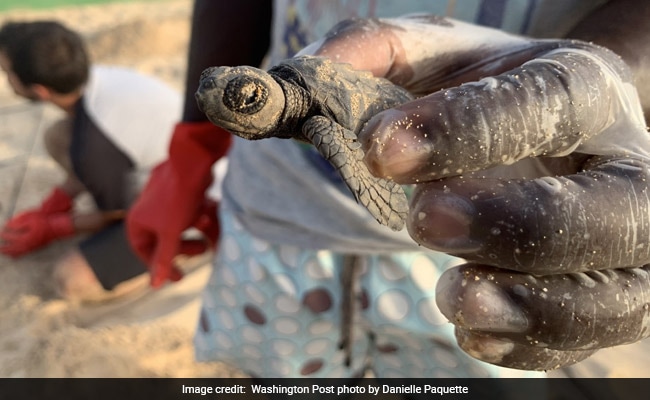 The past five years have been the hottest on record for the globe.

She emerged from the ocean just before midnight, clambering up the shore as her ancestors have for 200 million years.

Only stars glowed on this remote beach, where the sea turtle arrived to lay her eggs. She dodged plastic, fishing nets and oil spills to get this far. But another threat to her species lurks in the ground: sand temperatures that foster only one gender.

"One hundred percent girls," whispered the biologist, crawling next to the pregnant reptile. "This nest will be 100% girls."

As the earth gets hotter, turtle hatchlings worldwide are expected to skew dangerously female, scientists predict, making the animals an unwitting gauge for the warming climate.

On the tiny West African island nation of Cape Verde - home to a sixth of the planet's nesting loggerheads - the disparity is stark. Eighty-four percent of youngsters are now female, researchers from Britain's University of Exeter found in a July report.

"Males here could vanish in two or three decades," said Adolfo Marco Llorente, a Spanish researcher who camps every summer on Boa Vista, one of Cape Verde's 10 islands in the Atlantic. "There will be no reproduction."

The past five years have been the hottest on record for the globe. Roughly a tenth of the planet has warmed beyond 2 degrees Celsius (3.6 Fahrenheit), according to a Washington Post analysis - the point at which scientists say rising temperatures can trigger irreversible damage to ecosystems. Here in Cape Verde, the warming is above average - about 1.3 degrees Celsius (2.3 degrees Fahrenheit) just since 1964, based on records from the primary airport.

If the trend continues at the Intergovernmental Panel on Climate Change's lowest projection, researchers estimate that fewer than 1% of the country's sea turtles will be born male by the century's end. Higher rises could wipe them out completely.

This has raised alarm on the archipelago, which ties its economy to the roughly 30,000 sea turtles that annually swim here to nest. (Tourism accounts for 15% of economic growth.)

"Turtles are the brand of Cape Verde," said Paulo Veiga, the country's assistant secretary of state for the maritime economy.

The Cape Verdean government works with nonprofit organizations to protect the reptiles, tapping money from hotel taxes for beach cleanups, security to curb poachers and fences that keep predators like ghost crabs away.

Turtle guides on the islands, who lead visitors largely from Europe on overnight beach treks, are mandated to educate them about climate change.

"They see the turtles like toys," said Manuel Delgado Rodrigues, who has arranged such tours for two decades. "We have to tell them about the problems."

The U.S. Fish and Wildlife Fund also supports conservation projects on the islands; it spent $53,800 on the effort in 2018.

Not everyone thinks such tactics stand a chance against boiling weather.

"Humans can do nothing about that," said Djamilton Ramos, a Boa Vista City Council member.

Humans don't know why the environment shapes the gender of some lizards, crocodiles and various species of sea turtles. Even slight shifts in the land can warp their reproductive fate.

Sea turtle eggs that incubate in sand below 81.86 degrees Fahrenheit produce males, according to the National Oceanic and Atmospheric Administration, while nests in the mid-80s create a gender mix.

A 2018 study on green turtles near Australia's Great Barrier Reef found 116 female hatchlings for every male. The study found that 99% of hatchlings from the warmer northern beaches were female, while the share in the cooler south was much lower (69%).

NOAA researchers determined the gender chasm in Australia started widening after the early 1990s, when the temperature started climbing. Female turtles that hatched before that period outnumbered males by a dramatically smaller ratio - 6 to 1.

A 2015 report from San Diego also showed a shift after years of hotter nesting seasons: Sea turtles tested on the southern California shores had gone from 65% to 78% female.

And researchers at Florida Atlantic University estimate that hatchlings on Boca Raton's beaches these days are at least 90% female.

"All over the world, the sea turtle gender balance is being thrown way out of whack," said Lucy Hawkes, the English ecologist who led the study on Boa Vista.

Tourists won't see the effects immediately, Hawkes said, because the animals can live for 100 years and lay more than 1,000 eggs. Plus, sea turtles are polyamorous. One male can find dozens of romantic partners.

During nesting season on Boa Vista's southeastern edge, 20 researchers and college biology students live in tents and on mattresses under a giant acacia tree. From a distance, the leaves hide any trace of human activity. Tourists who make the 90-minute, off-road drive here see only plants, sugar-cookie sand and endless ocean.

Sea turtles move in the dark, so the team from BIOS.CV, one of the island's conservation groups, eats a spaghetti breakfast at 7:30 p.m. and works all night.

Scientists have been testing methods to cool the nests. Gently digging up eggs and moving them to shadier parts of the beach has proved to work. So do sprinkler systems and dividing offspring into smaller batches. (Eggs crammed together tend to warm each other up.)

Once replanted, the hatchlings burst from the ground some 50 days later in 1-by-1-foot enclosures, crawling in circles until someone scoops them into a crate and carries them to the shore, where they scramble into the waves.

It all starts with tracking pregnant turtles.

On a recent September night, Llorente, the camp's senior biologist, carried a red flashlight - white distracts the reptiles - and followed stone markers to the pitch-black beach.

He was looking for mothers dragging their 100-pound shells from the sea, leaving behind flipper marks that resemble skimobile tracks.

Instinct propels them to Boa Vista each July through October. Noises and light can spook them back into the water, so researchers must tiptoe until the reptiles pick a spot. Then the contractions start, and nothing can stop nature's plan.

He followed the lines to a sea turtle the size of a coffee table. She was frozen. Maybe asleep. Sometimes, the animals snooze after their long journeys.

Five minutes later - the signal. She slowly scooped up sand with her right flipper. Then her left.

Llorente and two other researchers crouched beside her, taking her measurements. She looked healthy.

Everyone was on their bellies, watching the turtle dig deeper and deeper.

An egg plopped down. Another. Another. They looked like shiny golf balls under the red light.

After about an hour, the mother was done. Llorente's team counted 74 eggs, slightly smaller than the average batch.

The sea turtle kicked sand over the hole and pushed away from her babies, never to see them again. The nest was about 150 feet from the water - the sand would be hot.

Llorente waited for her to disappear in the darkness.

He collected the eggs into a sack that became as heavy as a bowling ball. Then he carried them behind a fence on the beach, where researchers could ward off predators and watch their temperature.