Ultima Thule is made of two icy space rocks smushed together, and it resembles a reddish snowman. 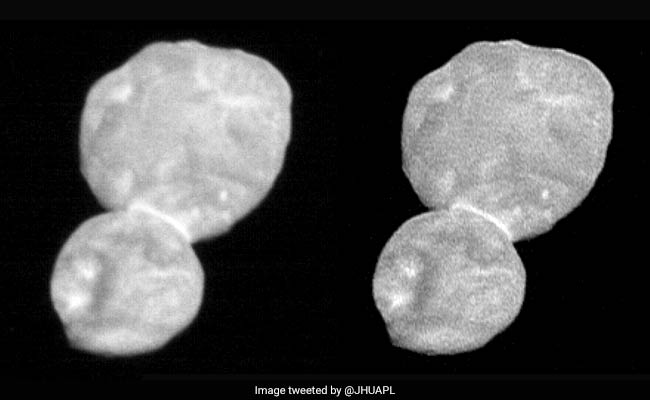 The image shows the most detailed image of the farthest object ever explored by a spacecraft.

The most distant object ever explored by spacecraft is a reddish, snowman-shape rock 4 billion miles from Earth.

The object, nicknamed Ultima Thule, was photographed by NASA's New Horizons spacecraft during a late-night rendezvous on the first day of 2019. It is the first inhabitant of the Kuiper belt - the ring of rocky relics that surrounds the outer solar system - that scientists have seen up close.

Its odd shape, which scientists term a "contact binary," indicates that it formed as two spherical rocks slowly fused together in the early days of the solar system. This finding lends support to a theory of planet formation that suggests worlds are born from slow accumulation, rather than catastrophic collisions, researchers said.

"This is exactly what we need to move the modeling work on planetary formation forward," said Cathy Olkin, the mission's deputy project scientist. "Ultima is telling us about our evolutionary history."

New Horizons's encounter with Ultima Thule happened so far away that it took six hours for signals traveling at the speed of light to reach Earth. Scientists didn't receive confirmation that the spacecraft survived until Tuesday morning, and the first scientific results didn't start streaming in until that night. 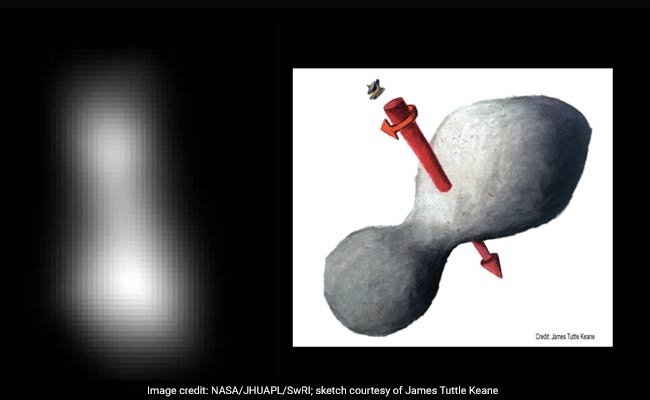 Preliminary measurements of this Kuiper Belt object suggest it is about 20 miles long by 10 miles wide. The direction of Ultima's spin axis is indicated by the arrows.

Researchers at the Johns Hopkins University Applied Physics Laboratory in Laurel, Maryland, where New Horizons is operated, were up late, working to transform those bits of data into the first high-resolution image of a Kuiper belt object.

The black-and-white photo was taken from about 30,000 miles away, as New Horizons sped toward its target at 32,000 miles per hour.

"Spectacular," principal investigator Alan Stern said at a Wednesday news conference at which he displayed the early images from the flyby. He described watching his colleagues jump out of their seats and embrace one another upon seeing the compelling, crystal clear image. "That's elation," he said. "And it's just the tip of the iceberg."

Scientists had suspected that Ultima Thule would not be perfectly round since the summer of 2017, when a global network of observers found the rock passing in front of a distant star. But the Kuiper belt object is so distant and so dim that even the most powerful telescopes saw it only as a flicker of light in the sky. Even as New Horizons sped toward its target, in the hours before closest approach, Ultima Thule resembled little more than a blurry bowling pin.

But now "it's a world," Stern said - with shape, character and implications for our understanding of planetary science.

Jeff Moore, New Horizons geology team lead, said Ultima Thule likely formed in the first few million years of the solar system from a swirl of smaller objects. Over time, dust and pebbles clumped together to form the object's two lobes, which eventually combined to form a single body. The lack of evidence for damage at the sight of the collision suggests that the joining was probably gentle, like tapping someone's bumper as you fit into a tight parking space, Moore said. "You don't need to fill out any paperwork."

This would make Ultima Thule a lot like the early planetesimals from which larger worlds - including our own - ultimately formed. But unlike the planets, which have undergone dramatic geologic change, and comets, which are heated and transformed by the sun, the Kuiper belt object has existed in a "deep freeze" since it first formed, 4.6 billion years ago.

"What we think we're looking at is the end product of a process that took place at the very beginning of the formation of the solar system," Moore said. He called New Horizons "a time machine," capable of taking scientists back to the moment of our origins.

Color images from New Horizons reveal that, like other Kuiper belt objects, it has a dark reddish hue. This is something of a mystery, because Ultima Thule is thought to be made mostly of ice. But researchers think radiation in this dark and distant part of the solar system could interact with contaminants in the ice, changing their color. Early observations about its chemical composition are expected to arrive Thursday, and they may help explain the phenomenon more.

And there are many more oddities to be explored, scientists said. Olkin pointed out dramatic variations in brightness that speckle the object. Moore noted that the early images did not show any solid evidence of impact craters; additional images may reveal whether Ultima Thule has been struck in the past or is worn smooth.

It will take as long as 20 months for scientists to download and process all the data collected during their brief encounter with Ultima Thule, scientists said. That includes a brief delay next week, when the sun comes between the Earth and the spacecraft, blocking all transmissions.

And New Horizons' mission isn't over, Stern said. The spacecraft's subsystems are healthy, and it has sufficient fuel to operate for another 15 to 20 years. He and his colleagues plan to apply for NASA approval to extend their mission, either to conduct another Kuiper belt object flyby or explore other aspects of the outer solar system.

(Except for the headline, this story has not been edited by NDTV staff and is published from a syndicated feed.)
Comments
Ultima ThuleNASA New HorizonsNASA