The scientists could not pull DNA from the bone, so they used a technique called ancient protein analysis to establish whom it came from. 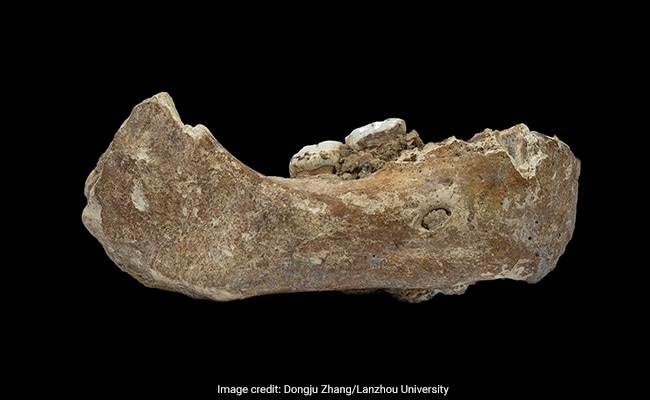 The half jawbone is the largest piece of a Denisovan discovered to date: Study authors.

Four decades ago, a monk came to pray at a limestone cave two miles above sea level in the Tibetan Plateau. There the monk found half of a human mandible. He took the bone from the cave, and his village gave it to scientists working in the area, who stored the jawbone in an archaeological collection.

In 2010, archaeologists began studying the fossil and made a remarkable discovery: This high-altitude jaw is not like yours or mine. Proteins pried out of its ancient teeth revealed the mandible belonged to a Denisovan, an extinct human species related to Neanderthals.

Denisovans were a "very mysterious group," anthropologist Jean-Jacques Hublin told reporters at a news conference this week. Hublin, an expert in human evolution at the Max Planck Institute for Evolutionary Anthropology in Germany, along with Dongju Zhang, an archaeologist at Lanzhou University in China, and an international team of collaborators published a study of the mandible on Wednesday in the journal Nature.

This particular Denisovan had a big chin. "This mandible is larger than my mandible, and very likely your mandible. It's a robust mandible, no question," Hublin said. One molar is not fully erupted, suggesting the Denisovan died while still growing.

The half jawbone is the largest piece of a Denisovan discovered to date, the study authors said. Scientists first identified this species using DNA extracted from a girl's finger bone found in a cave in Siberia, more than 1,000 miles from the newly described jaw. The world's collection of known Denisovan fossils, which includes several teeth, a bit of skull and splinters of bone, could fit in a cereal bowl.

Their genes still echo through the human lineage. Modern humans, some of whom mated with Neanderthals, must have mated with Denisovans, too. The proportion of Deniosvan DNA in genomes of people native to Melanesia, for instance, reaches 6 percent.

This discovery supports previous evidence that Denisovan DNA helped modern people thrive in the thin air of high altitudes. Certain Denisovan variants, such as a gene that allows the blood's proteins to use oxygen more efficiently, are found in Sherpas and other people who live in the highest climates of Asia. The jaw's owner, and his or her relatives, must have adapted to this harsh environment - otherwise, Hublin said, they would have swiftly died out.

No remains of another human species have been found at such a high altitude. Before this study, anthropologists assumed the tallest mountains and plateaus were the domain solely of Homo sapiens, Hublin said. "One of the most spectacular aspects of the discovery is, of course, the location," he said. The site, Baishiya Karst Cave in Xiahe, China, is at an altitude of 3,280 meters, or 10,800 feet. (Denver is about 1,600 meters high.) To live there is to survive on cold, low-oxygen air.

Because the monk removed the fossil from the cave, the study authors could not use the bone's surroundings to determine a precise age. They said it was at least 160,000 years old, based on radiometric dating of a mineral crust stuck to the bone. That's more than 100,000 years before the first signs of modern humans living in the Tibetan Plateau. Zhang returned to the cave, and the excavation team found stone tools and animal bones with cut marks.

Denisovan and Neanderthals share a lineage that branched off from the ancestor of modern humans about 700,000 years ago. The two sister species then split apart about 300,000 years later. It's unclear when or why the Denisovans vanished, but a recent genomic analysis suggests they had children with modern humans as recently as 15,000 years ago.

"The very early projected age of the fossil is exciting," said John Olsen, a paleoanthropologist at the University of Arizona, who was not a part of this research. The jaw's age indicates "that central and eastern Eurasia was a very complicated place in the late Middle Pleistocene, with respect to the story of human evolution."

The scientists could not pull DNA from the bone, so they used a technique called ancient protein analysis to establish whom it came from.

Proteins can outlast a fossil's DNA, said Frido Welker, a postdoctoral researcher in the Department of Human Evolution at the Max Planck Institute for Evolutionary Anthropology and a member of the study team. Welker examined the amino acids, the protein's building blocks, of eight collagen proteins from the mandible. One amino acid found in modern humans was swapped out for a Denisovan alternate. The bone, Welker said, is definitely not a modern human "or some other kind of great ape."

This "suggests that genetic adaptation to life at high altitudes is very old," Pääbo said. Denisovans and Neanderthals adapted to many environments in Eurasia, he said, "then modern humans from Africa came along and mixed a bit with them." Our ancestors picked up their genetic variants in the process, the blender of human evolution pulsing once again.

(Except for the headline, this story has not been edited by NDTV staff and is published from a syndicated feed.)
Comments
DenisovanDenisovan species