Japanese Researchers Want To Give Your Grandma A Robotic Monkey Tail

Researchers have unveiled a robotic tail that has been designed to be worn by elderly people who struggle to maintain their balance. 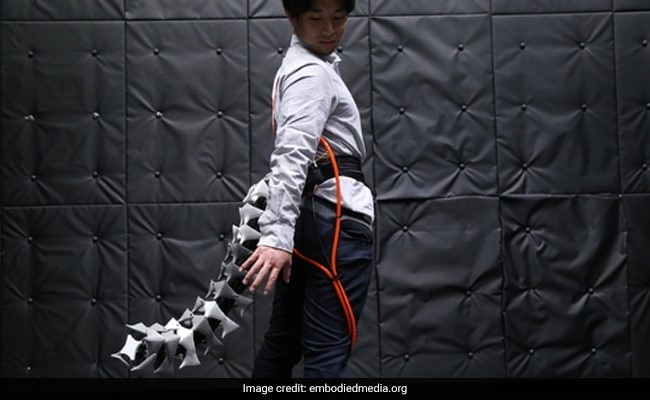 Researchers said they don't envision the device being limited to the elderly.

You've arrived at your elderly mother's home to pay her a visit with your chubby toddler in tow. After several minutes of watching the giggling tot crawl across the carpet, your mom decides she can't wait any longer - she needs to feel the squishy ball of human jello in her arms.

As she bends over at the waist, her arms outstretched, you panic, suddenly remembering that she has a bad back. Just then, as her body appears ready to topple forward, a mechanical appendage uncoils from beneath her dress and stiffens behind her like a wooden plank, steadying her from a fall.

You quickly relax, wondering how you could've been so forgetful.

Your mother has a tail.

Though the scenario outlined above is hypothetical, it's not exactly far-fetched. Japanese researchers at Keio University have unveiled a robotic tail that has been designed to be worn by elderly people who struggle to maintain their balance, according to Reuters.

Researchers told the wire service that the thick, one-meter device, which is worn using a harness, functions the same way a money or a cheetah's tail does, by providing its owner with a counterbalance during demanding movements. Animals also use tails to signal danger (deer), move in the water (fish), communicate aggression (beaver) or function as a poison-filled weapon (scorpion), but the current iteration of the Japanese tail appears to be devoid of deadly serums.

"The tail keeps balance like a pendulum," Junichi Nabeshima, a graduate student and researcher at the university's Embodied Media Project, told Reuters.

"When a human tilts their body one way, the tail moves in the opposite direction," he added.

It should come as no surprise that a robotic tail geared toward he elderly originated in Japan. In addition to embracing robotics, the nation's population is rapidly aging, according to the Los Angeles Times, which notes that about 25 percent of Japanese people are at least 65 years old (in the U.S., that number is about 16 percent). An aging populace, combined with a worker shortage, has led to a flurry of robotic designs aimed at assisting older people.

Design that imitates natural biological design is known as "biomimicry." Other examples include this backpack inspired by an armadillo's shell and a synthetic adhesive that was inspired by geckos and is strong enough to allow people to scale glass walls.

CNN reported that the mechanical tail project - called Arque - is about a year old. Initial designs mimicked feline tails, but proved to be too light to support the user's weight, the outlet reported. Video reveals that the latest version, which is more robust and was inspired by sea horse tails, sits near the wearer's lower back and adjusts seconds after the individual leans forward or bends to the side.

Researchers told CNN that the device needs to be at least five percent of the wearer's body weight to be effective. Using four artificial muscles and compressed air, the tail is capable of moving in eight directions, Reuters reported.

Though the experimental device is still being refined, researchers said they don't envision it being limited to the elderly. Other applications could include helping warehouse workers carry heavy objects or adding a sense of realism to virtual reality.

"I think it would be nice to incorporate this further developed prosthetic tail into daily life, when one seeks a little more help balancing," Nabeshima told Reuters.

(This story has not been edited by NDTV staff and is auto-generated from a syndicated feed.)
Comments
robotic tailsJapan robotic tailstails