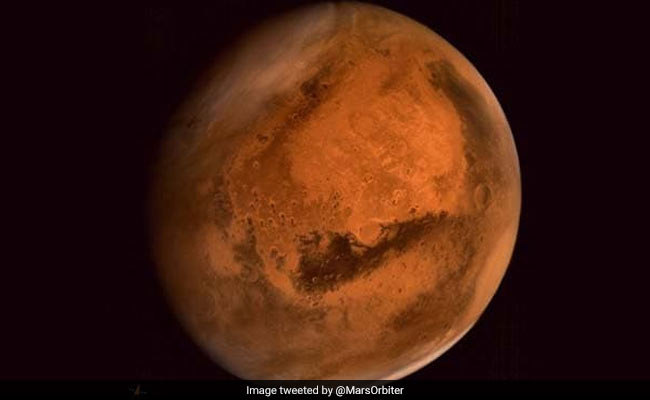 The Mangalyaan mission completed five years on Tuesday. "It's working and continuously sending pictures. It still has some time to go," Mr Sivan said.

Asked about 'Mangalyaan 2', he said work is going on and there is no decision on it yet.

The Mars Colour Camera took close distance images of Phobos and Deimos, the two moons of Mars. MOM is the only Martian artificial satellite that could capture the full disc of Mars in one view frame and also takes images of the far side of Deimos, ISRO said.

The data from MOM helped produce 23 publications in peer-reviewed journals, it added.

An important conclusion of the mission has been the finding that dust storms on the Martian can rise up to hundreds of kilometres, added Mr Sivan's predecessor AS Kiran Kumar.

The success of Mangalyaan, hailed for being cheaper than the Hollywood movie "Gravity" and much cheaper than NASA's Maven Orbiter, comes in the wake of ISRO's setback in the Chandrayaan 2 mission. The Maven Orbiter was similar to India's Mars mission.

Mangalyaan is India's first endeavour to successfully reach another planet. The launch vehicle, spacecraft and ground segment cost Rs 450 crore. One life-limiting parameter of a spacecraft, under nominal orbital conditions, is the availability of fuel, necessary to maintain the spacecraft's orbit and orientation. In the case of the MOM, scientists said there is some reserve propellant.

"The orbiter can go on for another year," Mr Kumar told Press Trust of India.

Detailing how fuel was saved, Mr Kumar said "non-nominal performance" for various segments were accounted for while planning the mission. "Depending on that we assign a certain kind of fuel for rectification to overcome those non-nominal purposes," Mr Kumar said.

Since the launch was perfect, he said, the mission got the full advantage of the "segments of fuel".

"This was the first time we were going beyond the earth's gravitational field. During that period, you could encounter non-normal situation which could have called for correction and ensuring that certain repeat operations would be required.

"We were able to perform all the steps without any hiccups and we succeeded in reaching Mars orbit without extra fuel consumption. The insertion into the Martian orbit also went off very well, which helped save fuel," Mr Kumar added.

Elaborating, Mr Murthy said precise location of the satellite by the ground station helped conserve fuel. Plus, effective control management also helped in extending the life of the MOM.

Citing another example of an ISRO satellite outliving its life, Mr Murthy said Cartosat-1, the first Indian remote sensing satellite capable of providing in-orbit stereo images, was planned for three years but kept performing for 10 years. The satellite was launched in 2005.